The Fourth Monkey by J.D. Barker 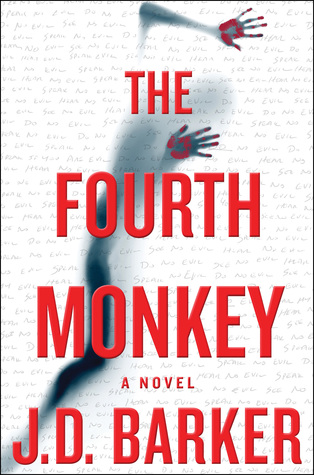 Se7en meets The Silence of the Lambs in this dark and twisting novel from the author Jeffery Deaver called, “A talented writer with a delightfully devious mind.”

For over five years, the Four Monkey Killer has terrorized the residents of Chicago. When his body is found, the police quickly realize he was on his way to deliver one final message, one which proves he has taken another victim who may still be alive.

As the lead investigator on the 4MK task force, Detective Sam Porter knows even in death, the killer is far from finished. When he discovers a personal diary in the jacket pocket of the body, Porter finds himself caught up in the mind of a psychopath, unraveling a twisted history in hopes of finding one last girl, all while struggling with personal demons of his own.

With only a handful of clues, the elusive killer’s identity remains a mystery. Time is running out and the Four Monkey Killer taunts from beyond the grave in this masterfully written fast-paced thriller.

The Fourth Monkey had a great twist which strikes at the right time!

As a lover of thrillers, I couldn't pass on this book and I'm glad I didn't. The last half of this novel had me completely enthralled.

The Fourth Monkey starts with the death of the serial killer known as the Four Monkey Killer or 4MK. Yet, even from the grave, he's able to throw the city of Chicago back into chaos one last time.

Well, with his dead body a box containing the ear of another 4MK victim is found. This serial killer has taken the lives of numerous individuals over the years. He's very smart, methodical and he chooses his victims for a reason. When he has his next target he proceeds to cut their ear off and he sends it in a box as his calling card (S7ven anyone?). Then, the eyes, and last their tongue. So definitely gross stuff.

Detective Sam Porter has been trying to catch the 4MK for the last five years. Recently put on leave, Sam is called at home when the 4MK body is found. Sam knows he has to join his team in search for the new victim. Since they need a set of fresh eyes, the team decides to add a new smart CSI to help them out. They need to follow the clues left by the 4MK. They know a young woman is running out of time.

The Fourth Monkey Killer had a great set of characters. More specifically, 4MK. I like how the 4MK was portrayed. His diary shed a great insight into the reasons for his pathology. It was really interesting to learn about his beginnings. You are going to think I'm crazy, but even though he did despicable things, I didn't hate him. How can that be? I guess the answer to that question would be the fabulous writing is all to blame.

A complimentary copy was provided by Houghton Mifflin Harcourt via Netgalley in exchange for an honest review.