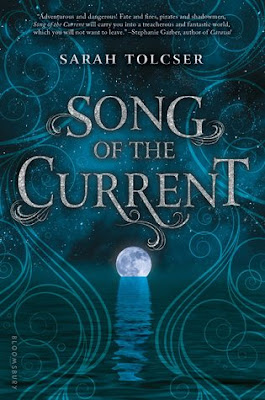 Caroline Oresteia is destined for the river. For generations, her family has been called by the river god, who has guided their wherries on countless voyages throughout the Riverlands. At seventeen, Caro has spent years listening to the water, ready to meet her fate. But the river god hasn’t spoken her name yet—and if he hasn’t by now, there’s a chance he never will.

Caro decides to take her future into her own hands when her father is arrested for refusing to transport a mysterious crate. By agreeing to deliver it in exchange for his release, Caro finds herself caught in a web of politics and lies, with dangerous pirates after the cargo—an arrogant courier with a secret—and without the river god to help her. With so much at stake, Caro must choose between the life she always wanted and the one she never could have imagined for herself.

From debut author Sarah Tolcser comes an immersive and romantic fantasy set along the waterways of a magical world with a headstrong heroine determined to make her mark.

Song of the Current was such a surprisingly delightful read. This book pulled me in right from the beginning, and I didn't want to put the book down! There were some slower portions of this book, but it was entertaining as a whole. There were so many fun elements to this story. The Song of the Current had pirates, humor, flirty banter, action, adventure, mythology, and some fantastic kissing scenes. Some parts of the book felt a little slow, but the author would then introduce something fun and exciting to grab my attention again. Some of the storylines were predictable, but I liked that the author also included some twists that I didn't see come. There was some romance in this book, and I thought it was fantastic. The author did a great job at creating a delicious romance that was believably paced and that never took over the plot of the novel. The romance made me smile and feel all the feels. Also, the author was HUGE on consent, which I was LIVING for!The main character, Caro, was such a spunky and badass character. I loved how she didn't let anyone or anything get in the way of her and her goals. Caro was rough around the edges but in the best way possible. Her thorny exterior resulted in some hilarious banter and jabs, and I loved how sweet and considerate she could underneath that tough exterior. Her bravery and loyalty were just some of the things about her that I admired greatly.There were some great side characters that I became extremely attached to. There was one male character in particular that I simply adored. He started off as an entitled ass-hat, but as the book progressed, he became more and more lovable. He turned out to be such a smart, caring, and loyal character. His sassy quips and flirty lines made me fall head-over-heels in love with him. He made me laugh out loud and swoon more times than I can count. Overall, this was an exhilarating, delightful, and charming book. If you want a YA novel filled with badass pirates, witty banter, swashbuckling action, fantastic characters, and a steamy romance, then this is the book for you!