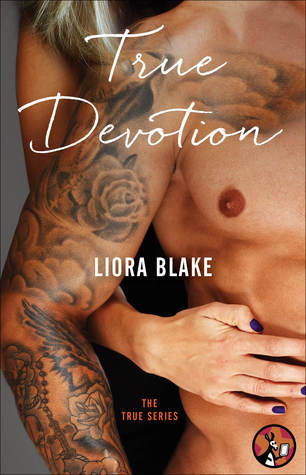 Devon Jenkins is trying to move forward. She dates guys who don't intimidate her. She stays away from anyone who can really hurt her. She has scars from her last real relationship when she placed her trust in the wrong hands.  For the last two years, she has been attracted to the guitar player from her brother's band, Simon. However, she keeps him at arms length to avoid developing feelings for him.

Simon Cole is Trex's manwhore guitarist. Or so he wants people to think. The reality is different. Simon has experienced loss, he has a good heart and he volunteers to help people in need. He likes to read, play the piano and has a geeky side. He also has been waiting for the chance to make Devon really look at him beyond the guy who she likes to spar words with. Simon has been patient and he knows his reward is coming.

~~
I love True North and I knew I liked Liora Blake's writing style. I couldn't wait to read Simon and Devon's story. I knew some things about Simon but in True Devotion, I got to know him pretty well. He was sweet, tender, smart and nothing like the player I thought he was.

Devon was scared of getting hurt again. She had trouble with her self worth and was constantly second guessing Simon's intentions. It takes someone as patient as Simon to show her that she could open her heart to love again. He was truly devoted to making her feel special. He was also pretty hot, making their love story pretty spicy.