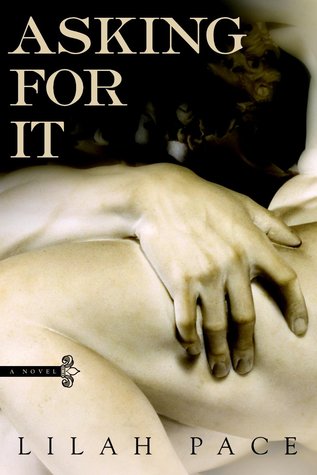 “This is who I am. This is what I want. Now I need a man dangerous enough to give it to me.”

Graduate student Vivienne Charles is afraid of her own desires—ashamed to admit that she fantasizes about being taken by force, by a man who will claim her completely and without mercy. When the magnetic, mysterious Jonah Marks learns her secret, he makes an offer that stuns her: they will remain near-strangers to each other, and meet in secret so that he can fulfill her fantasy.

Their arrangement is twisted. The sex is incredible. And—despite their attempts to stay apart—soon their emotions are bound together as tightly as the rope around Vivienne’s wrists. But the secrets in their pasts threaten to turn their affair even darker...

It's all delightful fun until you have to explain your life choices to your shrink.
"To say I have mixed feelings about this," Doreen said, "would be putting it lightly."
"You're not supposed to give opinions about my life. That's not what therapists do, right? They listen."
Doreen shoots me a look. "Have we ever had a traditional patient-therapist relationship?"
"No," I admit.
"And I doubt we're going to start now. Besides, I gave you my opinion when you asked whether or not I could 'believe this.' If you weren't uncertain about your decision, you wouldn't have asked."
She just poked through the bubble of giddiness I've floated in since Jonah and I spoke two nights earlier. All the concerns I had – that I still have – become clear once more.
She says, "I have to admit, I feared your meetings with Jonah would prove destructive, and they haven't. The shame you've carried about your rape fantasy has diminished to some degree. Both he and you took precautions to ensure your safety. Best-case scenario, I'd say. But you need to be aware what you're doing now – merging your fantasy life and your emotional life – that's about a thousand times more complicated."
"What's going to be so different?" I snap.
"You tell me."
I hate it when Doreen makes me answer my own questions, mostly because I usually do know the answers. They're just answers I don't like. For a moment I fidget on the couch – pushing up the arms of my white cardigan, curling my feet beneath me. But I can't postpone replying for long. "… I still wonder what kind of a man has such powerful fantasies about rape. When we play our games, he knows exactly what would scare me. He knows how to be cruel. He's thought about that a lot."
"That's a valid consideration."
"How can I judge him for that when I have rape fantasies too?"
"You know why you're so fixated on them. You don't know why he is."
I want to tell Doreen my theories about his family – about his anger with his mother, the way her threats might have taught him about violence. However, I remain quiet. Doreen would simply say that it's only a theory, with absolutely no proof to support it. She would be correct.
More gently, Doreen says, "Have you ever considered telling Jonah the truth about your rape?"
"No." The word comes out more sharply than I intended.
"You've still never told anyone besides your mother and me, have you?"
I shake my head. "Nobody else."
One time, years later, I tried to tell Chloe the truth about that night. But she shut me down before I'd even revealed the whole story, telling me I'd always been jealous of her, asking whether I'd come on to any of her other boyfriends. It wasn't exactly a moment for the Sisterly Bonding Hall of Fame. So Chloe still doesn't know. "Refusing to believe" is the same as "not knowing," right? For my sister, it might as well be.
"It's your secret. A piece of your life that's yours to share or not to share, as you see fit. You never have to tell a soul if you don't want to." Doreen has never tried to make me feel ashamed of my own silence, for which I'm deeply grateful. Sometimes I see courageous rape survivors on television or the internet, braving clueless commentators or vicious trolls to speak out about their experiences, and my admiration of them is mirrored by my own sense of cowardice. She continues, "But keeping this secret from Jonah – giving him that kind of power, without knowing how deep your wounds lie –"
"I've handled it so far," I say. Which is true.
So far, though, Jonah and I have played "softer" games. Ones where I could easily reassert myself at any second. I want more than that from him, though. I want him to tie me up. I want him to fight me, to defeat me.
I want him to own me.
When the sex between Jonah and me turned out to be so freaking amazing, I thought maybe I'd disarmed Anthony's power over me, for good.  What if I only buried the bomb deeper? As Jonah and I dig further into my darkest fantasies, we might be getting closer to the fuse.

This is not my usual book at ALL.
And it might not be for you either. Just because I loved it doesn't mean you will. Please be advised of the book's warning...

Asking For It deals with a female character who has sexual rape fantasies. Vivienne Charles is a TA graduate student. She is smart and very damaged. She has recently come back to her apartment after being away on break. She's still friendly with her ex-boyfriend who couldn't deal with what she wanted sexually. Unfortunately, after a party and too many drinks, part of her secret is out and Jonah, a professor, is now aware of her desires. When he offers to help her with them, she finds herself saying yes.

Jonah Marks has secrets of his own. He's smart, quiet, sexy and with a dominant personality.

But, for how long can an arrangement with so much trust involved remain impersonal???

This book blew me away. I was terrified to read it since it was going to be so out of my comfort zone. I had so many preconceived ideas before I even started it. So glad I gave it a chance....

Vivienne is smart, independent, with determined goals in life. However, she feels ashamed of her fantasies. She revealed her darker desires to her ex-boyfriend and it ended their relationship. She was strong enough to realize therapy was going to help her and when we meet her she has had years of it. Vivienne's pain was tangible. So raw. There was no way I couldn't like her.

“Tonight, I actually am. I’m asking for it.”

I thought Jonah was the answer to her prayers. With him she felt safe and he never disappointed me. He relished her vulnerability and he always took care of her. He was sensitive to her needs and I'm talking about the ones outside their sexual relationship. And when we learn his secrets it only made me love him a little bit more.

“Even though I still wonder what kind of man Jonah is—even though the roots of his fantasy continue to puzzle and unnerve me—I am already bound to Jonah Marks.”

Can't wait to see how the story continues...

“Sometimes life is like a video game. When things get harder, and the obstacles get tougher, it just means you leveled up.”

Lilah Pace is a pseudonym for a New York Times bestselling YA author. This is her first adult novel.

Giveaway
a Rafflecopter giveaway
Posted by MrsLeif at 9:00 AM