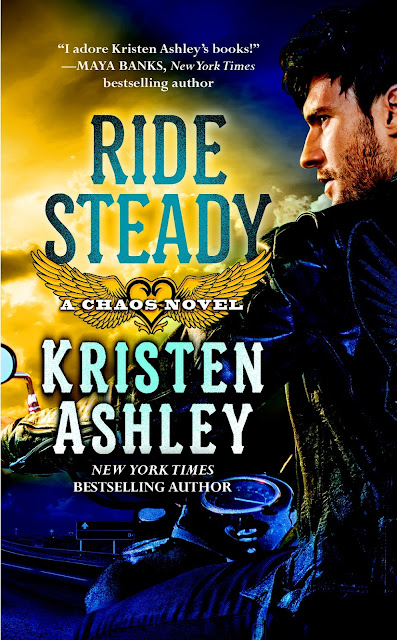 
Once upon a time, Carissa Teodoro believed in happy endings. Money, marriage, motherhood: everything came easy---until she woke up to the ugly truth about her Prince Charming. Now a struggling, single mom and stranded by a flat tire, Carissa's pondering her mistakes when a vaguely familiar knight rides to her rescue on a ton of horsepower.

Climb on and hold tight . . .
In high school, Carson Steele was a bad boy loner who put Carissa on a pedestal where she stayed far beyond his reach. Today, he's the hard-bodied biker known only as Joker, and from the way Carissa's acting, it's clear she's falling fast. While catching her is irresistible, knowing what to do with her is a different story. A good girl like Carissa is the least likely fit with the Chaos Motorcycle Club. Too bad holding back is so damned hard. Now, as Joker's secrets are revealed and an outside threat endangers the club, Joker must decide whether to ride steady with Carissa---or ride away forever . . .

“What now?” he clipped, planting his hands on his hips.
I watched him do this.
His knuckles were all scabbed. But his fingers were long, not graceful, but handsome. They were a working man’s hands. They’d be rough. I could even see grease stains around the nail beds.
Something about that caused something to happen inside me.
My focus shifted from his hands to his crotch. His jeans were faded. The area around his crotch more faded.
Up I went to a black belt with silver rivets in it that had seen some wear, the length beyond the clasp dangling from a belt loop to the side in a supple way, the leather not close to stiff.
Up his flat belly to his wide chest and broad shoulders and bulging arms.
And up to his long black hair that looked thick, messy, had a lot of wave and brushed his shoulders. His beard wasn’t  bushy, it was trimmed, but it was about two days away from being unkempt.
He was tall.
He was annoyed.
I felt the latter because he was the kind of man whose mood altered a room and I understood this because I was right then experiencing it. But I also knew it wasn’t just that or that we were the only ones in the room and having the conversation that was making him annoyed so of course I’d be feeling it.
It was him. He had that kind of power behind his personality.
I shifted my eyes to his.
Steel. A strange flat color that seemed impenetrable.
And suddenly I had a new dream. One that didn’t involve motherhood, cookies, doing laundry, and being a soccer mom.
One that centered around penetrating the impenetrable.
“So? What?” he prompted irately.
At his words, I flew across the room.
He had the chance to go back on a boot but that was all he had before my body slammed into his, my hands went to either side of his head and I lifted up on tiptoe as I yanked him down.
Then I pressed my lips hard against his.
A breath later, something strange happened.
Strange and wondrous.
His arms closed around me, and if I could think of anything, I’d worry about the state of my ribs.
But I couldn’t think of anything because his tongue spiked into my mouth and my world changed.
My entire world.
I didn’t have a dead sister.
I didn’t have a dead mother.
I didn’t have a lonely father looking after his mother, who was addled with Alzheimer’s disease.
I didn’t have an ex‑husband, who I once loved who I thought would cherish and protect me and help me build my dream, but now was making my life a misery and trying to take my son away from me.
I had this.
All of it. All the biker named Joker gave me by holding me so tight it was a pain that hurt so good and who was invading my mouth with his tongue in a way that stated clearly he could do it for a lifetime and never get enough.
My hands left his head so I could curve my arms around his shoulders as I pressed closer.
In return, one of his hands slid up my spine. He pulled out my ponytail holder and drove his fingers into my hair, cupping the back of my head, tilting it one way while he slanted his the other. He deepened the kiss in an intoxicating way while his other hand glided down and cupped one cheek of my behind.
That felt good.
He shuffled me back.
I went with him.
We kept kissing.
Then he turned quickly and we were falling.
Then he turned quickly and we were falling.
He landed on his back on the bed. I landed on him but barely had the opportunity to experience the dizzying beauty of the long length of his hard frame under mine before I was given more beauty when he rolled me and I had the weight of his hard frame pressing mine into the bed.
His hand left my bottom and went up, fingers yanking at my navy LeLane’s polo shirt, pulling it from my khakis, and then I had its heat, skin against skin.
I was right.
His hands were rough.

Carissa "Butterfly" Teodoro thought her life was going to be perfect after marrying the man she fell in love with. Now, she knows she is not living in a fairy tale. She is divorced, with her small baby son Travis and having a hard time paying her bills. Her ex-husband cheated on her with someone younger who has a perfect figure. When her car breaks down in the middle of the road, she is tempted to cry. If she doesn't get Travis on time to see his dad, her ex-husband might try to get a new judge to name her an unfit mother.  At first, when a biker stops to help her, she is unsure of what to do. Her son on the other hand is taken by him. The hot biker reminds her of someone but she really can't tell who he is with the beard covering his face.

Carson "Joker" Steele came back to Colorado to join the Chaos MC. As a child he was living in a nightmare. Her mother walk out on him even before he could talk and his dad thought of him as nothing more than a punching bag.  Joker has nothing in his life that can make him smile until Carissa enters his world again. As a teenager, he loved her from a distance and now he can love her as a man if he decides that he is worth it.

I love KA's books. Tack (Motorcycle Man) is one of my favorite books of all times.  Her books can make me laugh, cry, smile, repeat. I was very happy with Ride Steady. It had the perfect combination.

Carissa was sweet, caring and a great mother. She didn't want jewelry or big houses. She wanted to be a wife and a mother. To her, family was important. She had suffered so much loss already. She was desperate to feel stability in her life.

She also could be funny.

“What the fuck are you doin’?” he asked when I didn’t answer his opening question.
“That’s twenty cents,” I returned.
“Hunh?” he grunted.
“Regular curse words are a nickel,” I told him. “Bad curse words are a dime. Everyone knows the f-word is a bad one and since, starting now, you’re paying me every time you curse, that’s twenty cents you owe me.”

Joker was a good guy with a good heart. He joined the MC to feel that he belonged somewhere. He trusted his brothers with his life. The club also let him do what he wanted. Design bikes. He tried to push Carissa away because he didn't think he was good enough for her. I love that we get Shy, Tack and Rush to help him realize he needed to keep her in his life. I also loved how careful and protective he was of Travis. And Travis melted my heart with all the cute stuff he did.

“You and me and your boy. I know what we got. I know I like what we got. I know I wanna keep that strong and make it stronger. Shit happens. I hope like fuck it happens to us, we’ll fight through to the other side. But I know this and you gotta know it too: No matter what happens, I will never, not ever, not fuckin’ ever, Carissa, regret ridin’ down that shoulder to help you and your boy. It’s the best decision I ever made in my life, and I know that in a way I know I’ll feel that until the day I fuckin’ die.”

To make life even sweeter, KA gave us cameos. Lee, Indy, Hank, Hawk, Elvira, Brock, Mitch, Knight are all a part of this book. My heart did a little flip of happiness every time one will pop out.

I’d lost Althea. I’d lost Mom. To deal with the pain and make sure I lost nothing else, I’d put blinders on, made my mistakes, and then my dream had died.
But now the loss was over.
The blinders were off.
And I had Travis.
Then I got Joker.
And he gave me Chaos.
So it was done.
I was done losing.
And in being done, eyes open, facing ahead, back straight, head in the game, I was ready to win. 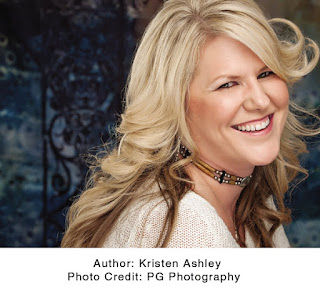 Kristen Ashley grew up in Brownsburg, Indiana, and has lived in Denver, Colorado, and the West Country of England. Thus she has been blessed to have friends and family around the globe. Her posse is loopy (to say the least) but loopy is good when you want to write. Kristen was raised in a house with a large and multigenerational family. They lived on a very small farm in a small town in the heartland, and Kristen grew up listening to the strains of Glenn Miller, The Everly Brothers, REO Speedwagon, and Whitesnake. Needless to say, growing up in a house full of music and love was a good way to grow up.  And as she keeps growing up, it keeps getting better.

Giveaway
a Rafflecopter giveaway
Posted by MrsLeif at 8:30 AM