We are SO excited to share  Samantha Towle's cover for Revived (Revved #2) with you!! Enjoy a sneak peek excerpt below! Revived is scheduled for release on July 12th!!! 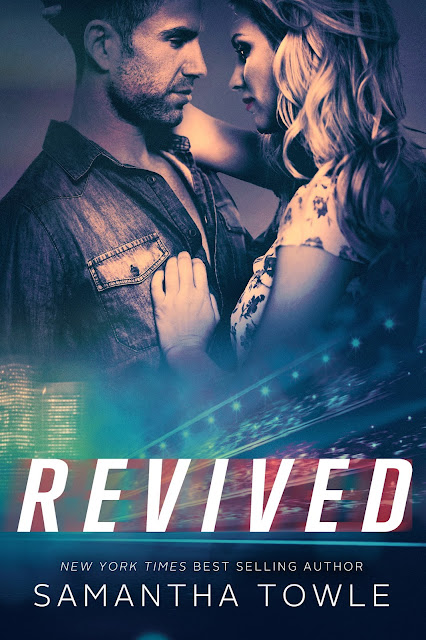 India Harris didn’t have the best start in life. Abandoned as a baby, she and her twin brother, Kit, spent their lives in foster care, only having each other to rely on. Then, at a young age, a relationship with the wrong man left India pregnant. Wanting to give her son the life she never had, she put herself through school and graduated with honors.

Now, at the age of thirty, she’s a highly respected therapist.

At the top of his game as a Formula One driver, Leandro Silva had everything—until an accident on the track left him staring death in the face. After enduring twelve months of physical therapy, Leandro is now physically able to race, but his mind is keeping him from the track. Frustrated and angry, Leandro’s days and nights are filled with limitless alcohol and faceless women.

Entering the last year of his contract, he knows he has to race again, or he’ll lose everything he spent his life working for. Forced into therapy to get his life back, Leandro finds himself in the office of Dr. India Harris.

Falling for his uptight therapist is not part of Leandro’s plan.

Having unethical feelings for her patient, the angry Brazilian race car driver, is not part of India’s plan.

But what if the wrong person is the only person who is right?

My eyes move to the magazines on the table. There’s a sports mag peeking out from under the fashion mags.
Leaning forward, I pull it out, instantly wishing I hadn’t.
Top of the magazine is a picture of me, with the caption ‘What the bad side of Formula 1 looks like’.
Nice.
So, now I’m the bad side of F1. Good to know.
I already know what the media say about me. How I’ve turned from a great racer into a drunk, and a whore.
They’re not wrong on the whore part – well, whore is a bit harsh, I don’t charge for my services. And I wouldn’t say I’m a drunk. I just like to drink, a lot.
I shouldn’t read the article, I know this, but the sadistic part of me has me turning those pages.
Finding the article, eyes scanning the text, I pick out the usual shit.
Why is Silva no longer racing? Physically he’s healthy. Is it mental problems? Fear over racing because of his accident. Is that why he drinks – drowning his misery in alcohol? Such a shame to see, a once great driver, fall from grace so dramatically.
Frustration and rage grip my chest like a vice.
Fuck this. I don’t need this shit.
Even though I can’t race, it’s not like I actually need to.
I don’t need to race. I just need to drink and fuck. That’s all I need now. All I’ll ever need.
Liar.
I am a liar, and a chicken shit. And that’s why I’m sitting in the waiting room of a therapist.
Maybe I’m beyond help.
Tossing the magazine back on the table, I get to my feet ready to leave this place, just as the door opens, revealing the epitome of what I could really do with screwing right now.
My eyes trail up the toned, tanned legs, to the fitted pencil skirt that I would happily hitch up to see the magnificent pussy that I bet lies beneath. A pale pink blouse is tucked into that skirt, covering what look like a fantastically sized pair of tits. Silky blonde hair sits on her shoulders. Hair that I would enjoy getting my hands all tangled in, while I fuck those bright red lips of hers, enjoying seeing that lipstick smeared all over my cock.
My dick pulses in my jeans, more than ready to proposition her with the offer.
“Mr. Silva.” She steps forward. “I’m Dr. Harris. But please call me India.”
She’s Dr. Harris?
This, hitch-your-skirt-up-and-let-me-fuck-you-right-now, woman is my new therapist.
Well that’s just fucking great. It’s not like I can bang my therapist.
I put my cock on hold, and giving her my best smile, the one that always has panties dropping to the floor, I say, “And you can call me Leandro.” 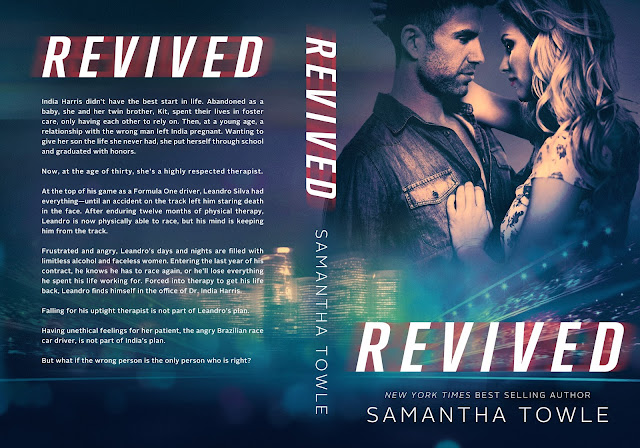 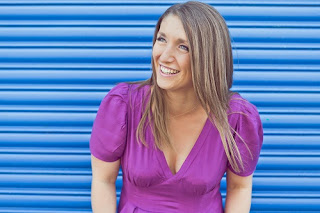 New York Times, USA Today, Wall Street Journal and international bestselling author Samantha Towle began her first novel in 2008 while on maternity leave. She completed the manuscript five months later and hasn't stopped writing since.
She has written contemporary romances, THE MIGHTY STORM, WETHERING THE STORM, TAMING THE STORM and TROUBLE.
She has also written paranormal romances, THE BRINGER and the ALEXANDRA JONES SERIES, all penned to tunes of The Killers, Kings of Leon, Adele, The Doors, Oasis, Fleetwood Mac, and more of her favourite musicians.
A native of Hull and a graduate of Salford University, she lives with her husband, Craig, in East Yorkshire with their son and daughter.
Facebook | Twitter | Website | Goodreads

Race car mechanic Andressa “Andi” Amaro has one rule—no dating drivers. With a good reason behind the rule, she has no plans on breaking it.
Carrick Ryan is the bad boy of Formula One. With a face and body that melts panties on sight, and an Irish lilt that leaves women on their knees, begging for more. He races hard and parties harder. The youngest driver to ever sign with F1, he’s still at the top of his game five years later, breaking hearts on and off the tracks.
When Andi is offered her dream job working in the glamorous world of F1, she leaves her home in Brazil, positive she can handle working for Carrick. But she’s not prepared for the off-the-chart sparks that fly the moment they meet.
Now, Andi has a crush on the one man she can’t have, and her resolve is about to be put to the test, because Carrick has decided he wants Andi, and he plans on testing her to the very limit...