Moonlight on Nightingale Way (On Dublin Street #6) by Samantha Young 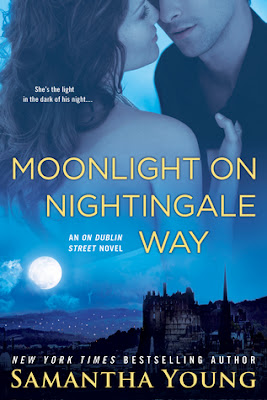 "Logan spent two years paying for the mistakes he made. Now, he’s ready to start over. He has a great apartment, a good job, and plenty of women to distract him from his past. And one woman who is driving him to distraction…


Grace escaped her manipulative family by moving to a new city. Her new life, made to suit her own needs, is almost perfect. All she needs to do is find her Mr. Right—or at least figure out a way to ignore her irresistible yet annoying womanizer of a neighbor.


Grace is determined to have nothing to do with Logan until a life-changing surprise slowly begins turning the wild heartbreaker into exactly the kind of strong, stable man she’s been searching for. Only just when she begins to give into his charms, her own messy past threatens to derail everything they’ve worked to build…"

I am extremely sad that this series is over, but I was not sad with how this book turned out. This book was the perfect wrap up to all of the books, and I really adored this book. Samantha Young managed to create a book that beautifully tied in everything you could want from a contemporary romance. There was banter, chemistry, angst, family and friend relationships, and great characters. What I really loved about her characters was that they were all flawed, but they were still very lovable.

The main character was Grace. She was extremely likable and relatable. She was sensible and smart. At first, Grace seemed like the complete opposite of the other main character, Logan. Grace started off as almost a stubborn stick in the mud. Logan started off as a typical ladies' man. However, overtime, they both grew as characters and become better people because of their relationship.

“No man alive loves a woman as much as I love you. I never thought I would feel this way about anyone. I didn’t think it existed. Not for me.”

I had such a fun time reading the angry banter between Logan and Grace. They started off at each other's throats, but that slowly changed overtime. I thought Samantha did a great job developing their romance at a believable pace. Their romance was a slow burn, and every moment of it was delicious. *sigh*

This book had some plot lines that were not all about romance. There was some family angst in this book, and it made this book more emotional and real. I really enjoyed those plot lines in the book, because it helped to keep from this book ever getting boring. Sometimes I wanted the angst between Logan and Grace to be nipped in the butt, however, that angst did not ruin the book for me.

What I really enjoyed was the epilogue of this book. Samantha Young wrapped up this story so well, and she also snuck in a wonderful surprise for the other couples from the previous books. This book was an excellent way to end this series. Samantha definitely out did herself with this book!

Logan James MacLeod is starting his new life after being released from prison. He has a good job thanks to Branden and his nights are busy with different ladies. This makes his next-door neighbor really mad.
Grace Farquhar is an editor that works from home. Since Logan moved next door to her, his sex life is making it impossible for her to sleep. She has tried to be nice but it doesn’t seem to work. Talking to him only makes it worse.
A unique antagonism begins between these two.
Despite their differences, when a situation presents that makes Logan vulnerable, Grace steps to the plate to help him out.
With this new truce, a friendship blossom but soon the attraction for each other is hard to dismiss.

I’m so sad Moonlight in Nightingale Way is the end of this series. Samantha Young created some of the most amazing characters. Back when I read On Dublin Street, I fell in love with it.  As soon as I finished it I hit the recommend to everyone link on Goodreads (never done it before or after Dublin). Now, years later, Logan and Grace were the perfect way to end it. Both characters were likable. Their banter was great. And Holy smokes! their chemistry hit it out of the park. I caught myself smiling many times.

I love that we get glimpses of the rest of the lovable characters we’ve met through the rest of the series. Even better, at the end of the book, we get a tiny epilogue for each of our heroines.
I love reading Samantha’s books. It doesn’t matter at what time I start her books, I’m unable to stop myself until I’m done with them.  Whatever she releases the next, sign me up for it.

"I can't imagine my life without you in it."

A complimentary copy was provided by the publisher in exchange for an honest review.
Posted by MissDaemon at 8:30 AM