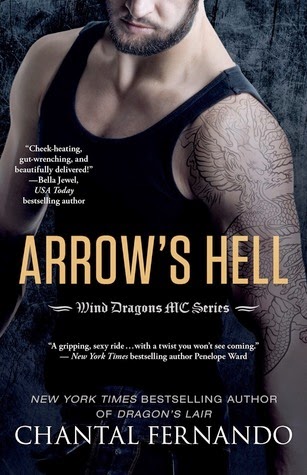 I loved the first book in this series, "Dragon's Lair", so I was eagerly awaiting the release of this book. After everything that happened to Arrow in the first book, I was actually really nervous to see what was in store for him in this book. I was so happy with the path Chantal took Arrow in this book. In this book, Arrow definitely developed as a character, and I liked being able to see his tough biker side and his sweet side. He was closed off at first, but he slowing started to open up as he slowly fell in love with Anna. I was so glad that the romance in this book was not insta-love. The romance developed nicely, and I enjoyed every moment of it.

This book was darker and grittier than the first book, but I never was turned off by it. I think it just made the book feel edgier. It was never dark to a point that it scared me or anything, so I was thankful for that.

Arrow was a major heartthrob in this book. However, there were a lot of other characters in this book that I found myself falling in love with. One of the characters I really enjoyed was the main character, Anna. I found Anna's character extremely relatable, and I was never annoyed with her. All of the other characters in this book were well written and I adore them all! I can't wait to see all of the biker men fall in love. This will definitely be a series that I continue to read, and I recommend it to anyone who loves biker novels. Give me book three!

From the prologue of this book I was swept into the story.
Arrow appears as a funny character in Dragon’s Lair until he looses Mary, someone he loved but never got a chance to tell how important she was to him. He’s living with regret. He also murdered the President of the rival MC and has spent time in jail. All these facts change his personality.  He becomes serious, brooding and wants nothing to do with love.

When Rake, another Wind Dragon member, brings his sister Anna to meet the MC, Arrow feels desire for her. It is the first time in a long time someone has stirred emotion in him again. He knows he shouldn’t want his MC brother’s sister and he struggles with avoiding Anna but at the same time he doesn’t think he can let her move on without him.  Anna doesn’t help either, she makes it clear to Arrow that she wants him and only him.

“Have you ever seen someone for the first time and just wanted them? Something about them attracts you, like a moth to a flame, without rhyme or reason. Every time I look at Arrow I feel that pull. That want, that need. There is something about him, something that draws me to him. Sure, he is gruff and rough around the edges. He is also temperamental, broody, and usually pretty damn grumpy. He is a man of few words—the strong, silent type.”

~
Arrow’s Hell is even better than Dragon’s Lair. This MC crowd is full of interesting characters including a character from the rival MC.
I liked Arrow, I felt his pain and his guilt. Anna was smart, sassy and funny.  I was pleased to see their relationship progress naturally. No insta-love for them. Arrow wanted someone better for Anna. He wanted to protect her from the MC life and Anna wanted someone who would be there for her unconditionally.
There is a twist in the book which was a good addition to their love story. Forgiveness is hard to give but not impossible.

“I always get what I want, Anna. Best you realize that now.”