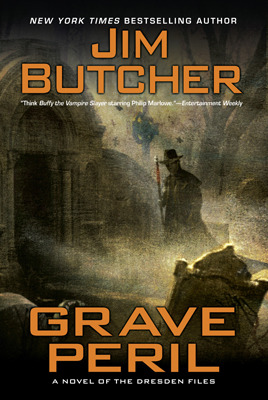 Grave Peril begins with Michael and Harry fighting a ghost who's attacking a hospital nursery. Ghosts are behaving erratically and dangerously. Harry is sure someone is manipulating the spirit world. He needs to find the culprits before more lives are in danger.  A young woman shows at his office asking for his help. She believes someone is after her and unless he helps her she will die. By now we know Harry is incapable os saying no to a damsel in distress.

Gave Peril has a lot of action. We get more character development for Harry and his friends/enemies. I like Harry. He is one of the good guys although I still can't stand his self deprecating attitude. I feel like screaming: Not everything which goes wrong in the world is your fault Harry!

As for other characters:

Bianca was easy to hate. She did nothing to make herself redeemable.
Susan does care for Harry but sometimes she doesn't listen.
Murphy didn't piss me off like she did in the last book. No police brutality.
Michael was my favorite character and I was pleased he was joining forces to help Dresden out.  Not so much for his wife.

The best part for me was listening to James Marsters narrating the book. He does an amazing job as Harry.