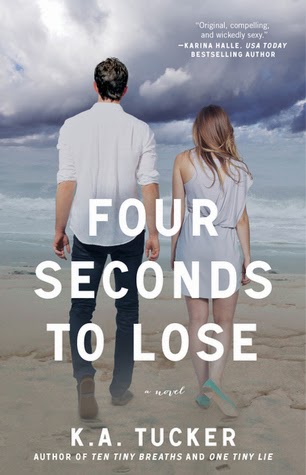 Cain Ford is the owner of the strip club from Ten Tiny Breaths.
He is a nice guy with a good heart. He tries to help all the girls that work for him.
He doesn't date his employees but when Charlie Rourke walks into his office he's mesmerized. She reminds him of Penny, a girl he loved and couldn't protect.
Charlie is running from her stepfather.  She is in real danger. He makes her do things that are illegal. Even her name is false.  If working in a strip club can bring her the money to disappear, she will undress in front of strangers even if it she hates doing it.
At first, Charlie doesn't know what to think about her new boss. She knows he is Hot but is he really a nice guy or just a pimp? The more she spends time with him the more she realizes she would like to stay with him but she knows her time is running out.
Charlie will do anything to prevent him from getting hurt in the crossfire.

I have fallen in love with the characters of this series. However, this one was probably my least favorite. The pace was slower than prior books. The humor was almost non existent. I hate that because Cain is such a good guy.  He has helped multiple girls get out of strip club life.  Don't get me wrong, he can be a badass when he wants to be. He has awesome qualities. He is loyal, perseverant, intelligent, great business man. It doesn't hurt that he is handsome too.
I'm happy he found Charlie to share his life. I did laugh with his internal turmoil about pursuing her. Charlie was also a great character. She wants to survive but also wants to keep Cain safe.
I was happy to get cameos from the other couples as well.
I can't wait for Ben's story. He made me laugh when he was teasing Cain all the time about his interest in Charlie.

“I believe some people are inherently evil. I believe guilt is a powerful motivator. I believe redemption is something you can strive for but never fully achieve. I believe second chances exist only in dreams, never in reality. I believe you don't have years, or months, or weeks to impact a person's life. You have seconds. Seconds to win them over, And seconds to lose them.”