The Trapped Girl by Robert Dugoni 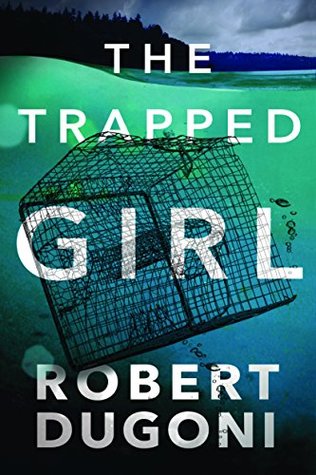 When a woman’s body is discovered submerged in a crab pot in the chilly waters of Puget Sound, Detective Tracy Crosswhite finds herself with a tough case to untangle. Before they can identify the killer, Tracy and her colleagues on the Seattle PD’s Violent Crimes Section must figure out who the victim is. Her autopsy, however, reveals she may have gone to great lengths to conceal her identity. So who was she running from?

After evidence surfaces that their Jane Doe may be a woman who suspiciously disappeared months earlier, Tracy is once again haunted by the memory of her sister’s unsolved murder. Dredging up details from the woman’s past leads to conflicting clues that only seem to muddy the investigation. As Tracy begins to uncover a twisted tale of brutal betrayal and desperate greed, she’ll find herself risking everything to confront a killer who won’t go down without a deadly fight. Once again, New York Times bestselling author Robert Dugoni delivers a taut, riveting thriller in the fourth installment of his acclaimed Tracy Crosswhite series.

The Trapped Girl was a great suspense book! It had me questioning the who-do-it throughout the book. I have to say, I was pleasantly surprised to see Robert Dugoni giving us plenty of twists and a great cast of characters!

The story begins with a young man driving his boat to retrieve his illegal crab pots. What he catches is more than he bargains for. There is a dead woman in one of his pots and he immediately calls 911. Detective Tracy Crosswhite and her partner Kinsington Rowe become the lead detectives. After great detective work, they find the identity of the woman to later discover that she might be someone else. A woman by the name of Andrea Strickland. What makes matters worse, is that Andrea is believed to have died while climbing Mount Rainier with her husband Graham weeks before.

Andrea and Graham were having marital problems and Andrea had a trust fund she inherited when her parents died. Her husband is going through financial problems and he has many debts after his new business tanks. So Graham has a great motive to murder her. Tracy and her team have to determine the truth and the real identity of the corpse found in the crab pot.

Despite this being the 4th installment in the series, the author gives us plenty of relevant details about the past of the main characters.

Tracy is a woman in her forties. She has found love in her childhood friend Dan. Her sister was murdered about twenty years ago and cases involving missing/death females become personal to her. She has a great instinct and she has an amazing team. Kins, Faz and Del were all great.

I really need to go back and read the prior books in this series although it's not necessary. Just for pure enjoyment.

A complimentary copy was provided by Thomas & Mercer, via Netgalley in exchange for an honest review.