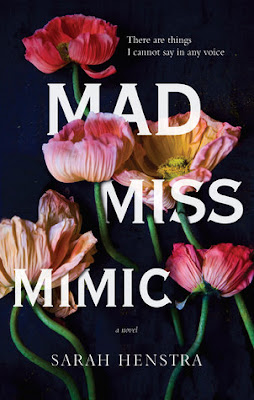 Jane Austen meets Arthur Conan Doyle in a historical fiction debut for fans of Ruta Sepetys and Elizabeth Wein. Born into an affluent family, Leo outwardly seems like a typical daughter of English privilege in the 1870s: she lives with her wealthy married sister Christabel, and lacks for neither dresses nor trinkets. But Leo has a crippling speech impediment that makes it difficult for her to speak but curiously allows her to mimic other people's voices flawlessly. Servants and ladies alike call her "Mad Miss Mimic" behind her back... and watch as she unintentionally scares off every potential suitor. Only the impossibly handsome Mr. Thornfax seems interested in Leo...but why? And does he have a connection to the mysterious Black Glove group that has London in its terrifying grasp? Trapped in a city under siege by terror attacks and gripped by opium fever, where doctors (including her brother-in-law) race to patent an injectable formula, Leo must search for truth in increasingly dangerous situations - but to do so, she must first find her voice.

Mad Miss Mimic was a fresh and interesting novel! With an addictive setting and unique characters, this story was a fun ride. The overall plot of this book was very intriguing and compelling, even though it was predictable at times. The book started off on the slower side, so I had a hard time really connecting to the story at first. I also found the pacing of most of the book to be a little off. There were some slow moments throughout the book that were hard to push through. However, the exciting and fast-paced moments were such a joy to read! The historical aspects of this book were so well written. It was easy to see that the author put a long of time and effort into researching the 18th century. I loved being in the historic setting and exploring the society, social norms, and medicine in the 18th century. The author really nailed that part of the book! I also loved the focus on drugs that the author weaved throughout the story. It was such an addictive and interesting thing to read about.The characters in Mad Miss Mimic were a lot of fun! The main character, Leo, was such a unique and lovable character. I felt bad for Leo because she seemed very insecure and almost lonely in the beginning of the novel. It was so wonderful to see her grow stronger throughout the story. Her stammering and "Mimic" character were both very interesting to read about. I thought the "Mimic" side of Leo was a really unique spin that I have never seen in a novel before. The development of "Mimic" felt a tad bit too convenient by the end of the book, but it was still an interesting plotline. Tom was another great character in this book! Tom was clever, kind, swoon-worthy, and passionate. Tom was a character that slowly grew on me throughout the book. I really enjoyed getting to know his character and seeing him interact with Leo. The romance in this book was adorable! I thought it added a sweet and swoony aspect to this book, which I enjoyed.As I mentioned earlier, there were some predictable outcomes in this book. However, there were also some things that happened that I wasn't expecting. The author did a great job at keeping me guessing with some of the plotlines in this novel. Overall, this was an enjoyable and entertaining read. I would recommend this to readers who like mystery novels set in a historical time period.