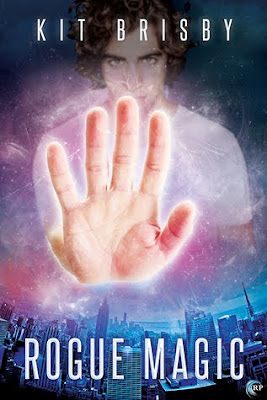 While trapped in a stalled subway train on his morning commute, PR rep Byron Cole flirts with Levi, a young waiter with adorable curls. But Byron's hopes for romance crash and burn when Levi saves him from a brutal explosion—with outlawed magic.When Levi is imprisoned, Byron begins to question everything he's ever believed. How can magic be evil when Levi used it to save dozens of lives? So Byron hatches a plan to save Levi that will cost him his job and probably his life. If he doesn't pull it off, Levi will be put to death.Byron discovers that he isn't the only one questioning America's stance on magic. And he learns that Levi is stubborn, angry, and utterly enchanting. Time is running out, though. Byron must convince Levi to trust him, to trust his own magic, and to fight against the hatred that’s forced him to hide his true nature his entire life. The more Levi opens up, the harder Byron falls. And the more they have to lose.

Rogue Magic was an interesting and steamy new fantasy novel. The world that the author created almost felt like a dystopian fantasy. This book focused a lot on mages, their rights, and how much the public feared them. I felt so awful for the mages who were oppressed and the treatment they went through in this world. It was terrifying to think that if there were mages in this world, that non-mages might react as drastically as they did in this book. It really hits home the idea that EVERYONE should have freedom and rights, which I think is still a relatable topic in this day and age. The one thing that bothered me about the world that the author created was that I felt like we didn't know much about the world. I wanted to know how mages were discovered and how non-mages came to fear them so much. I also was curious as to when the criminalization of mages started. I thought there were some holes in the world building, and I would have liked to have those questions answered. I liked the cast of characters in this book. They all had fun and unique personalities. I liked the personal growth a lot of the characters went through, especially Byron. Byron started as a close-minded and unaccepting person but then developed into a sympathetic, accepting, and understanding person. The overall plot of this book was interesting, but there were some slow moving parts in this book. I felt like the plot got muddled in the middle of the book. The middle of the book felt like it was not really going anywhere. I started to loose some interest during that section. However, I was glad that the last part of the book added some excitement back into the story. The romance in this book was VERY steamy. I thought the author did a great job at creating sexual tension and chemistry between Byron and Levi. I could feel myself blushing during some of the sexy scenes! I did think that the romance felt slow paced at first, but then it felt like the romantic feelings developed a little too quickly. I would have liked to have seen the "forbidden" romance develop at a slower pace. Overall, I thought this was a fun novel. I look forward to seeing what this author comes out with next!

3 / 5 Fangs*This ebook was given to me in exchange for an honest review. *
Posted by MissDaemon at 8:30 AM