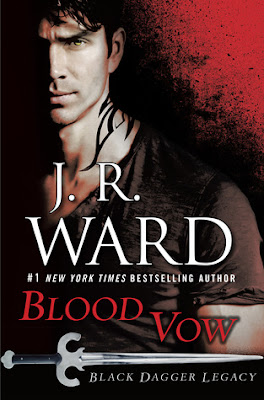 The Black Dagger Brotherhood continues to train the best of the best to join them in the deadly battle against the Lessening Society. Among the new recruits, Axe proves to be a cunning and vicious fighter—and also a loner isolated because of personal tragedy. When an aristocratic female needs a bodyguard, Axe takes the job, though he’s unprepared for the animal attraction that flares between him and the one he is sworn to protect.

For Elise, who lost her first cousin to a grisly murder, Axe’s dangerous appeal is enticing—and possibly a distraction from her grief. But as they delve deeper into her cousin’s death, and their physical connection grows into so much more, Axe fears that the secrets he keeps and his tortured conscience will tear them apart.

Rhage, the Brother with the biggest heart, knows all about self-punishing, and he wants to help Axe reach his full potential. But when an unexpected arrival threatens Rhage and Mary’s new family, he finds himself back in the trenches again, fighting against a destiny that will destroy all he holds most dear.

As Axe’s past becomes known, and fate seems to be turning against Rhage, both males must reach deep—and pray that love, rather than anger, will be their lantern in the darkness.

I will never. EVER. get enough of the Black Dagger Brotherhood! The world that has been created is so intricate by this point that there is no stopping it! As long as J.R. Ward keeps writing I will keep reading. With Black Dagger Legacy being a spin off series from the original Black Dagger Brotherhood Series we still get all of the brothers that we know and love in these books! Yippee!

Axe is still a trainee in the brotherhood program, he's from the wrong side of the tracks I guess you would say. He has no family and no money. All he cares about is training and sex. I love when he meets Elise because right away he feels something, he just doesn't know what it is. I just love it whenever these males try to fight it, it makes things a little more interesting. Of course Elise's family is part of the glymera, but when it's meant to be it's meant to be. She wants more from her life than to marry, she wants to finish school and have a career, which is frowned upon in the glymera. Neither she or Axe have any plans on mating, until...

I was glad that Rhage's story continues in this book. New characters were introduced in the last BDB book and I was able to get more of the little family that Rhage and Mary have. Ahhh Rhage, he is so perfect! I also love how Lassiter has entwined himself. He really needs to his book soon! Now if we can just get more of V, Z, and Qhuinn I'll be a very happy woman!

I am very happy with the start of this new series, and in classic J.R. Ward fashion she is setting up the next books already, which I will definitely be reading. There is plenty of action with the Lessers, sweet loving moments, and sexy as hell ones too!