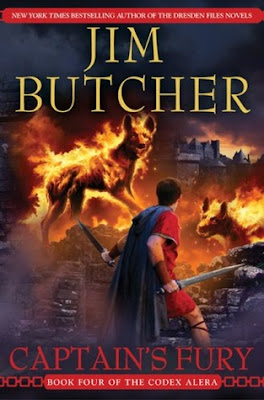 After two years of bitter conflict with the hordes of invading Canim, Tavi of Calderon, now Captain of the First Aleran Legion, realizes that a peril far greater than the Canim exists-the mysterious threat that drove the savage Canim to flee their homeland. Now, Tavi must find a way to overcome the centuries-old animosities between Aleran and Cane if an alliance is to be forged against their mutual enemy. And he must lead his legion in defiance of the law, against friend and foe--or no one will have a chance of survival . . .

Two years have passed since Tavi became Captain Scipio and made the First Aleran a bad-ass legion. He has made sure his legion is well organized, prepared to fight, and it has kept the enemy at bay. Tavi believes there is a way to find peace between Alera and Canim. Nasaug offers Tavi a deal. This deal will take Tavi and friends into a very risky mission but not before that Tavi has to deal with politics too.

“He'd lived most of his life surrounded in a cloak of lies and half-truths.”

Lady Aquitane is still an enemy. She is supporting Senator Arnos and she keeps Fidelias close to the action too. She's manipulative and she won't rest until she has overthrown Gaius Sextus.

For his part, Sextus is dealing with Kalare. He takes Amara and Bernard to Kalare's lands. Neither Amara nor Bernard know the mission until much later but by then things are complicated.

I love so many parts of this book. Tavi has become a man. He's smart and he trusts his instincts. He has become a great leader. The First Aleran Legion respects him and would do anything for him. My favorite part was when he returned to his men and the truthfinders verify his identity.

Kitai is my second favorite character after Tavi. Every time she speaks, she does it perfectly. She's a warrior at heart. She's the perfect mate for Tavi.

“Your death doesn't belong to me. We flipped a coin. I lost.”

I had mixed feelings about Isana in the prior books and if you read the series you know why. I can say that in Captain's Fury she redeemed herself. She finally shows how much power she truly has once she let's go of the fear.  I hope she has a happy ending with Fade.

“Worry is fear in disguise. And fear will eat you from the inside out if you let it.”

There are so many others characters that I like. Max, Crassus, Ehren, Varg, Nasaug to mention a few. Jim Butcher does great humor and pretty amazing fighting scenes!

“The plan is insane,” Ehren said. “You are insane.” He looked around the inside of the tent. “I’ll need some pants.”

Only 2 books left after this one. Not sure I want them to end.