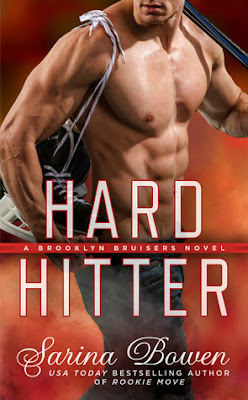 He’s a fighter in the rink, but he’s about to learn that playing nice can help you score...

As team captain and enforcer, Patrick O'Doul puts the bruise in the Brooklyn Bruisers. But after years of hard hits, O'Doul is feeling the burn, both physically and mentally. He conceals his pain from his coach and trainers, but when his chronic hip injury becomes too obvious to ignore, they send him for sessions with the team’s massage therapist.

After breaking up with her long-term boyfriend, Ari Bettini is in need of peace of mind. For now, she’s decided to focus on her work: rehabilitating the Bruisers’ MVP. O'Doul is easy on the eyes, but his reaction to her touch is ice cold. Ari is determined to help O'Doul heal, but as the tension between them turns red hot, they both learn that a little TLC does the body good...

If you are looking for a sexy sports romance to get your hands on, then I would definitely recommend checking out this book! Hard Hitter was an entertaining and fun novel. I really enjoyed the characters and the world of hockey! This was a great book to snuggle up with.The characters in this book were all lovable characters that I enjoyed reading about. Ari was a fun character to read about, especially because she has a suspenseful storyline. Something from her past came to haunt her, and it added a deliciously thrilling aspect to the novel. It might have been a touch too dramatic at times, but it was addictive and definitely nerve-wracking. I thought the author did a great job at mixing in a thrilling storyline to this romance novel.O'Doul was a sweet and sexy male character. It was cute watching him open up to Ari. He was guarded and unsure at first, but watching him become more comfortable with Ari was adorable. Both O'Doul and Ari were hesitant of each other because of their past. It was heartwarming to see them come together and learn that it is okay to trust and love another person. They were so stinking cute together! I also want to mention how well paced the romance was! I find a lot of romance books have a romance that is too fast paced, which makes the romance hard to believe. I thought the author did a great job at creating a believably paced romance.I really liked how well the author balanced the hockey aspect with the other storylines of the book. I never felt like the hockey scenes got boring or redundant. They were nicely placed throughout the story. Some parts of the story were a little slower than others, but I still really had a great time reading this book!Overall, this was a fun and romantic book to read! If you are looking for a sports romance full of tension, mystery, hockey, and some secrets, then this is a book you definitely need to pick up. I know I plan on reading more books by this author in the future!

4 / 5 Fangs *This ebook was given to me in exchange for an honest review. *