The Burning Page (The Invisible Library #3)
by Genevieve Cogman 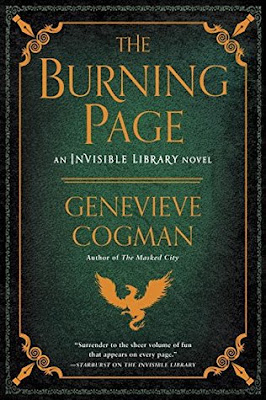 Librarian spy Irene and her apprentice Kai return for another “tremendously fun, rip-roaring adventure,” (A Fantastical Librarian) third in the bibliophilic fantasy series from the author of The Masked City.

Never judge a book by its cover...

Due to her involvement in an unfortunate set of mishaps between the dragons and the Fae, Librarian spy Irene is stuck on probation, doing what should be simple fetch-and-retrieve projects for the mysterious Library. But trouble has a tendency of finding both Irene and her apprentice, Kai—a dragon prince—and, before they know it, they are entangled in more danger than they can handle...

Irene’s longtime nemesis, Alberich, has once again been making waves across multiple worlds, and, this time, his goals are much larger than obtaining a single book or wreaking vengeance upon a single Librarian. He aims to destroy the entire Library—and make sure Irene goes down with it.

With so much at stake, Irene will need every tool at her disposal to stay alive. But even as she draws her allies close around her, the greatest danger might be lurking from somewhere close—someone she never expected to betray her...

The Burning Page was another thrilling and intriguing addition to this series! It was so nice to be reunited with Irene and Kai. I had been missing them SO MUCH. I loved going on adventures with Irene and Kai again. They are both such passionate, smart, cunning, and resourceful characters. To top it all off, they love books! So, it is easy to say I love them. I really liked learning more about Irene and her background. The previous book gave us a lot of insight into Kai's character, so it was nice to learn more about Irene. I am so intrigued to learn more about her parentage. I NEED ANSWERS. Also, I SHIP IRENE AND KAI SO HARD. I love their friendship, but I LOVE THEIR SEXUAL TENSION MORE DANG IT. One of my favorite relationships is when the characters start as just friends and develop their relationship into something more. I need that type of development to happen between Irene and Kai. I WILL GO DOWN WITH THIS SHIP.The first half of this book was a little hard for me to get into. I felt like not a lot was happening in the first half of the book. A lot of things were discussed, but I still felt like it was slow moving. It was hard for me to really get invested in the storyline in the beginning. Thankfully, the book did pick up and I was able to blow through the rest of the book! The second half of the book was more fast-paced and had more action. The suspense and conflict starting getting extremely intense and addictive. THAT was the book I was looking for! I have seen that there are suppose to be more books in this series, and I am so excited to have more books in this series! I NEED MORE OF MY LIBRARIAN SPIES AND DRAGON SHIFTERS. PLEASE.If you are looking for a new fantasy series with dragons, libraries, action, and a SLOW burning romance, then I would recommend checking this series out! If you have already read the previous books in this series, then you are in for a treat with this next installment!