Blood and Bone by Valentina Giambanco 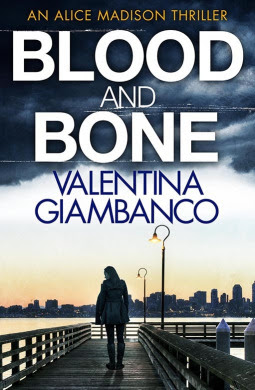 After two years in the Seattle Police Department, homicide detective Alice Madison has finally found a measure of peace she has never known before--a sense of belonging.

When a local burglary escalates into a gruesome murder, Madison takes charge of the investigation, only to discover that this is no ordinary killing. She finds herself tracking a serial assassin who has haunted the city for years--and whose brutality is the stuff of legend among the super-max prisons of the Pacific Northwest.

As she delves deeper into the case, Madison learns that the widow of one of the victims is being stalked--is the killer poised to strike again? As pressures mount, Madison will stop at nothing to save the next innocent victim . . . even if it means playing a killer's endgame by presenting herself as the bait.

"Some people are made for each other"

I love thrillers and Blood and Bone sounded good. After finishing it, I found myself wanting to read the books prior to this one and making sure I keep this series on my radar for the next ones to come.

Alice Madison is a young detective who's given the lead in a homicide case. Her partner, detective Kevin Brown, is someone she can trust and she appreciates his input and guidance.

The case they are investigating involves a horrible and gruesome murder. A man has been killed and the violence involved in his death is something most detectives won't forget. Alice does believe something doesn't add up and a closer look at the case reveals a connection to other murders and the possibility of a serial killer. Furthermore, the prior cases could involve a killer who enjoys blaming the murders on innocent people.

At the same time, Alice is dealing with the DEA. They are asking her about the whereabouts of John Cameron, whom Alice saved in a prior book and who's a wanted man by the law. This will bring a certain attorney back into her life.

I liked Blood and Bone. I thought the twist at the end was good and I even like the small part the romance plays into the story.  I'm intrigued by John and I hope she never has to track him down. I'll hate for one of the two to perish.

A complimentary copy was provided by Quercus via netgalley in exchange for an honest review.