Closer Than You Think by Karen Rose 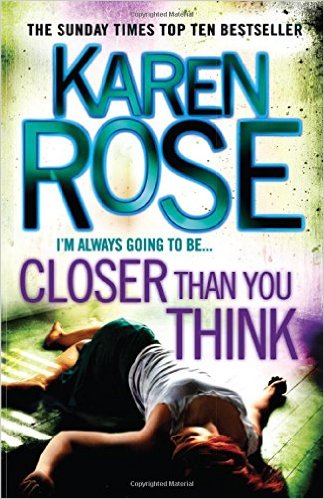 Psychologist Faith Corcoran is desperate to escape the stalker who’s made her life a nightmare for the past year—desperate enough to run to the one place that has been her nightmare far longer. Both boon and bane, her recent inheritance of her grandmother’s old house in Cincinnati offers sanctuary in which she can start her life anew, but requires that she face the dark memories that still resonate to this day.

But she has no idea how close to home her fears still are.

Two college girls have gone missing in the area, and FBI Special Agent Deacon Novak is called to work on the case. When his inquiry unexpectedly leads him to Faith, he finds a beautiful and brave woman he can’t help but fall for. Soon they’ll discover that this seemingly simple investigation is anything but. Reaching back decades into Faith’s own past, it will shatter everything she believes to be true and will give terrifying new meaning to flesh and blood

This is my first Karen Rose book. For years, I have seen her name and I've always heard great things about her suspense novels. I finally decided to jump into the fray.

Despite Closer Than You Think being book 16, it's actually the first book in her Cincinnati series.

Faith Corcoran is moving back home after twenty-three years. Her grandmother passed away and she has left her house. She wasn't sure she wanted to live in the mansion. She has bad memories of the place that still haunt her as an adult. Faith is running away from a stalker. Leaving Miami, changing her last name is one way to shake off her stalker.  She was attacked four years ago by him. After he was released early from prison, he has been following her. She had multiple attempts on her life but the Miami police are not listening. Her ex-husband, a Miami cop, might be the reason why her pleas have been unanswered.

Deacon Novak is an FBI special agent. He recently moved to Cincinnati to be closer to his sister and brother. His little brother is having a hard time at school and before he gets expelled permanently, Deacon has to intervene. When Deacon's parents were killed, he was too young to win custody of his siblings. Instead, his uncle and his wife took over their care. Presently, Deacon is ready to be there for them.

I thought Closer Than You Think was excellent. It had one of the best introductions of a hero I have ever read. I love how unusual Deacon's persona was. I can only imagine it. A super-hero with a leather coat...sigh. No wonder Faith couldn't hold her tongue.

This book is full of suspense and I love the twists it had. I couldn't put it down. I needed to know who the killer was and why did they want Faith dead so bad. The romance was well done. The secondary characters were also interesting.

Word of advice, her books are long. Avoid planning anything except reading for half a day or more. Believe me, you won't want to stop reading.