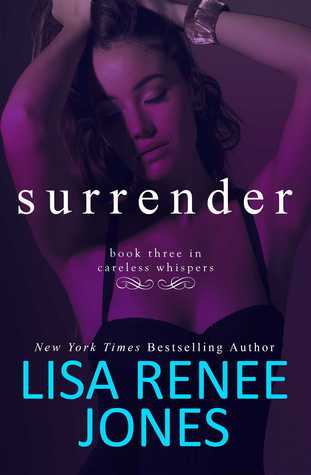 Chris and Sara from Inside Out return in the explosive finale to Ella's story from New York Times bestselling author Lisa Renee Jones with the third book in the sexy, suspenseful Careless Whispers series.

Passion burns fiercely hot between Ella Ferguson and Kayden Wilkens, the man who held secrets and lies in his hands, and then allowed them to fall into hers. But even though he has become her anchor—helping her recover from amnesia after finding her unconscious in an alley, and allowing her into his secret world—all is not what it seems. Kayden still has secrets, and pieces of Ella's past are still shrouded in the darkness of her mind, while the powerful man who hunts her will not stop until she is his. In this final, explosive novel in the Careless Whispers series, Ella discovers that while her life with Kayden didn't begin in that dark alley...it could easily end there.

Surrender is the third and final book in the Careless Whispers series. This series must be read in order!

"My surrender is my control."

Surrender is the conclusion of the Careless Whispers series. This series should be read in order.

In Surrender, Ella is finally able to recover her memory. At first, it's as flashbacks but by the end, she knows everything she was missing.

Everyone wants to know where she hid the three billion dollar butterfly necklace. Kayden to return it to the rightful owners while the two mobsters want it to further gain more power. Niccolo is head of the Italian mafia and Neuville from the French mafia.

Ella knows Neuville is the man who had her captured and treated her as a slave. She tries really hard to avoid fearing him. She doesn't want to give him any power over her.

Ella is not sure she's friend or foe to Kayden. She believes herself to be a CIA agent. She doesn't want to jeopardize Kayden's love for her or put anyone in danger.

Kayden is determined to keep her safe at whatever cost necessary. He's willing to kill for her. He won't let Niccolo or Neuville have her.

Surrender had a lot of action and suspense. It also has a couple of Sara and Chris's cameos which made the story even better. Blake Walker also plays a part. I had no problems following the story line and all my questions were answered. I'm sad to see this characters go. 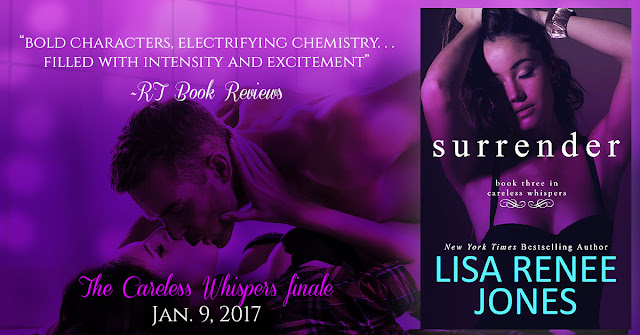 The sound of the entry door beginning to rise again has me turning and watching it lift. Kayden ducks under it as I had, obviously impatient to find out what I’ve remembered, his leather jacket and his shoulder holster missing, his navy t-shirt hugging his broad, hard chest. It is then that I’m reminded of what made me request that we talk alone, and knowing it’s not something he wants to hear, but has to, I need to ensure he listens. And I need to stay focused on my memories, and what they’re telling me--not what he makes me think and feel, or what the past tells him.

He strides toward me, his energy predatory in this moment. Actually, there is always something rather predatory about him, which is far too sexy to ensure conversation, especially after today’s shift in events. I could be CIA. I could be his enemy, no matter what he says otherwise, and really, truly, right now, I just want to feel him close, to get lost with him in the way he makes me get lost. But there are things bigger than us at stake, things that are far too complicated and dangerous to indulge in such desires, even if they feel almost as if they are needs.

Determined to stay focused, I round the desk placing the massive wooden surface between us. By the time I’ve shoved back the desk chair, claimed the spot in front of it, and pressed my hands to the surface again, Kayden is doing the same opposite me.

His gaze meets mine, his probing, intelligent eyes those of a Hawk who sees the past clawing at me, while fighting to contain it and control it. “Why are you running from me?” he asks.

“I don’t run,” I say, and I can almost hear my father say, “Running makes you a victim. Never be a victim.”

“Then why are you over there and I’m over here, when we’d both much rather you be here or me there?”

“I’m giving us space to have the conversation I need to have with the Hawk--not with the man who loves me.”

The predatory gleam in those pale, too blue eyes of his softens, right along with his voice. “He’s the same person. I will always be the Hawk and the man who loves you.” 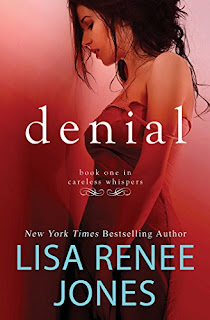 
From New York Times bestselling author Lisa Renee Jones, the first book in the CARELESS WHISPERS series. This is a spin-off of the wildly popular INSIDE OUT series that follows Ella Ferguson, Sara McMillan's best friend. You do not have to read Inside Out to read Careless Whispers!

Ella Ferguson awakes alone in Italy, unsure of who she is, and a gorgeous man has claimed her as his own. He's tall, dark, and sexy, with money and power, the kind of man who makes a girl want to be possessed. And he does possess her, whispering wicked wonderful promises to her, stealing her trust and her heart. Soon though, the past finds her, yanking her from a cocoon of passion and safety. Everything is not how it seems. The truth will shatter her world, but it can set her free, if it doesn't destroy her first. 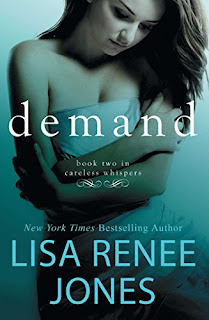 
The sexy, breathtaking mystery continues in New York Times and USA TODAY bestselling author Lisa Renee Jones's stunning second novel in the suspenseful Careless Whispers series--where shocking revelations will reveal themselves and nothing, and no one, will ever be the same.

Still struggling with amnesia, Ella questions everything she's known about Kayden Wilkens--the alluring stranger who claims to have found her unconscious in an alleyway. But was he truly a stranger--or did Kayden know her before his supposed rescue? Tormented by the potential betrayal he denies, with fleeting memories of a bombshell in her recent past, Ella must face a hard reality. Every action has consequences . . . and trusting Kayden, the one thing she most desires, might result in the direst consequences of all.

New York Times and USA Today bestselling author Lisa Renee Jones is the author of the highly acclaimed INSIDE OUT series. Suzanne Todd (producer of Alice in Wonderland) on the INSIDE OUT series: Lisa has created a beautiful, complicated, and sensual world that is filled with intrigue and suspense. Sara’s character is strong, flawed, complex, and sexy - a modern girl we all can identify with.

In addition to the success of Lisa's INSIDE OUT series, she has published many successful titles. The TALL, DARK AND DEADLY series and THE SECRET LIFE OF AMY BENSEN series, both spent several months on a combination of the New York Times and USA Today bestselling lists. Lisa is presently working on a dark, edgy new series, Dirty Money, for St. Martin's Press.

Prior to publishing Lisa owned multi-state staffing agency that was recognized many times by The Austin Business Journal and also praised by the Dallas Women's Magazine. In 1998 Lisa was listed as the #7 growing women owned business in Entrepreneur Magazine.

Lisa loves to hear from her readers. You can reach her at www.lisareneejones.com and she is active on Twitter and Facebook daily.