Lose yourself in a world of gods and spirits in DARK TEMPEST, sequel to the enchanting romantic fantasy Red Winter

With her fingers still lightly touching his jaw, she swallowed hard and whispered, “Shiro?”
The ancient cunning in his gaze sharpened. “That is not my name.”

In the mesmerizing sequel to Red Winter, Emi can no longer hide within the safety of the shrines. The goddess has charged her with a new task, one that will take her deep into the perilous realm of yokai. But as the solstice draws near, Shiro’s lost memories begin to emerge and his shadowed past threatens to destroy him. With the fate of the world in her mortal hands, she cannot falter, but is she strong enough to sacrifice everything—including him? 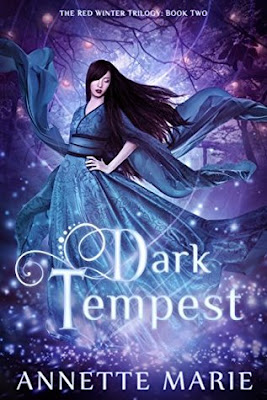 Emi has dedicated her life to becoming the perfect vessel for the goddess Amaterasu, but the insidious betrayal of another deity has changed everything. Now Amaterasu has charged Emi with an urgent mission: to find and free the earthly gods before mankind is brought to its knees beneath divine tyranny.

At her side is Shiro, the mysterious fox spirit. When she first saved his life, she could never have imagined that behind his cunning and confidence, he was lost—his power bound by a devastating curse and his memories obscured. His veiled history is somehow tied to the missing gods, but he can’t remember how or why.

As their search leads them into the murky depths of the spirit realm, the shadows of Shiro’s past begin to emerge. With each brief awakening of his true self, she loses a little more of him. The fate of the heavens and earth rest in her mortal hands, and she must find the missing gods before time runs out for her world—and for Shiro.

Honestly, how does Annette Marie do it? She continues to write fascinating and addictive novels that never disappoint.The first 30% of this book was on the slower side, and I had a hard time fully getting back into this story. I was worried that this book wasn't going to be as enjoyable as the first book. Thankfully, after the 30% mark, the book's pace really picked up. After that, I couldn't stop reading the book. There was a ton of action that took my breath away and kept me on the edge of my seat. That mixed with the Japenese mythology, romance, humor, and plot development lead to one spectacular book. The main character, Emi, was still as selfless and thoughtful as she was in book one. I loved how strongly Emi cared for those around her and how she always put the safety of others first. Since she was surrounded by a lot of strong mythical creatures, she was typically viewed as the "weak human". It was awesome to see her stand her ground, save people, and show the others that she was valuable too.There were times where I would have liked her to kick a littlemore booty, but I understood she wasn't extremely powerful. It was actually kind of nice to have a YA character who wasn't a badass fighter 24/7. Since she wasn't as powerful as the other characters, it made her more relatable and it made her moments of triumph feel even more badass. I cannot wait to see how she grows in book three.

Shiro was just as swoon-worthy as ever in this book. His snarky remarks always put a smile on my face! I was glad that he was still extremely sassy in this book, but it was nice to see his more vulnerable side too. Shiro went through a lot in this book and I really enjoyed learning more about him and his past. Shiro has a lot more to him that meets the eye and I loved seeing those sides of him. He was an over-protective alpha male at times, but I couldn't help falling more in love with him in this book. I am trash for him and I don't even care.

Also, Shiro is a BADASS. His fight scenes were freaking awesome. GIVE ME MORE SHIRO. The romance in this book KILLED me. Every little interaction between Emi and Shiro had made my heart flutter. Watching their feelings grow for each other put a smile on my face. THEY ARE SO ADORABLE TOGETHER! Their banter was wonderful in this book and their chemistry felt electric. One thing I really love about Emi and Shiro is that they make each other stronger. They always support each other and they want what is best for each other. I ship Shiro and Emi SO FREAKING HARD.Annette is great at creating a romance that never takes over the plot and adds just the right amount of deliciousness to the story. I LOVE IT.Overall, I thought this book was a great addition to this series. Fans of this series will not be disappointed with this installment! If you are in looking for a unique YA Fantasy series, then I would recommend checking out this series. I NEED BOOK THREE.

“Maybe Amaterasu can help indirectly,” Emi said, straightening where she sat. “What about a spring blessing ceremony?”

“It’s a ceremony of renewal,” she said, a flicker of hope sparking in her. “Miko perform it for sick people and worshippers who want a fresh start or rejuvenation. Maybe it would help you recover your memories.”

“Those ceremonies have almost no power,” Shiro said, doubt written all over his face. “And even if they did, I don’t think a kami ceremony will work on a yokai.”

She held up a finger. “One, I’m not just any miko. Two, the power of the ceremony will come from Amaterasu and she wants you to remember, so I’m sure she’ll make an exception.”

Launching to her feet, she grabbed the shoulder of his shirt and tugged on it. “What’s the harm in trying? Come on.”

“Come on where?” he grumbled, giving in to her pulling and rising.

“I need more space. Over here.”

She led him to the center of a clear, flat spot in the trees, the snow unbroken by animal tracks. As the kamigakari, she had learned all the same skills as a regular miko—in fact, she had learned them even better than the average shrine maiden.

He looked at her askance as he sank to sit cross-legged in the snow. “This won’t work.”

“Don’t be such a pessimist.” She scouted around the nearby trees and selected a thin, foot-long stick with a cluster of golden leaves clinging to the end. Snapping it off, she returned to stand in front of him.

“I don’t have the proper tools. I can’t do the dance without something to hold.”

His skeptical look intensified. Ignoring him, she turned her back to him and adjusted her kimono. Wrong outfit and lacking the proper instruments, but it would have to do. The ritual of the dance—the careful, precise movements that called upon the powers of the earth and the heavens, human ki and kami ki coming together—was what mattered. Closing her eyes, she took a few deep breaths and mentally centered herself. Letting the tension slide away and the calm serenity of the ceremony envelop her, she cleared her mind and turned back to him.

His eyes widened when he saw the difference in her demeanor. Keeping her expression smooth and tranquil, she extended the twig out to the side, her arm perfectly parallel to the ground, and positioned her feet with the toe of her left sandal touching the ground in front of her right foot. And then she began.

The movements flowed from within her, rising from deep inside her core. Her arm swept slowly in a quarter circle until the twig pointed forward, and she simultaneously slid her left foot out and around, drawing a curving line in the snow. Her body began to turn, her other arm rising, palm rotating from the sky to the ground, wide sleeves fluttering, the motions smooth with slow elegance. Warmth shimmered through her body and resonated into the ground as her feet slid from step to step.

As she moved in the precise choreography of the dance, she became aware of Shiro’s gaze following her every move. She brought the twig toward her chest and swept her other hand past the leaves before lifting her palm to the sky, the dance requiring she lift her face to the stars as well. She spun slowly, feet sliding through the snow in careful movements.

She completed her turn, automatically seeking his face—and that ruby stare caught her, holding her fast. She lowered her body in a painfully slow and smooth kneeling motion that had taken months of practice. As she went down, she felt herself falling into his eyes, sinking into their depths. From within the shadows of his gaze, something ancient looked out at her, something wise and cunning and dangerous. Something that whispered to her and called to her soul.

Barely able to breathe, she extended the branch to him, turning her hand in the same motion. The leaves rustled as they brushed his kosode over his heart. She couldn’t look away from him. That ancient something in his eyes had her, held her, chained her.

Her leg muscles clenched, and she began the precise, measured rise until she stood over him, the leaves held over his head. His stare followed her up, refusing to release her. She was drowning in him, losing her grasp on the world around her. But the dance was ingrained in her very bones and she was so close to the end. She slid her right foot back, transferring her weight onto it as she spread her arms wide, palms turned up, the leaves rustling.

Then her heel hit a tree root under the snow and her graceful movements came to a crashing end.

She went over backward, arms flailing. With a poof of displaced snow, she landed hard, the air shoved out of her lungs. As she wheezed, Shiro’s face appeared above her, his mouth canted in a crooked grin that revealed one pointed canine.

“Is that the traditional way to end a ceremony dance?” 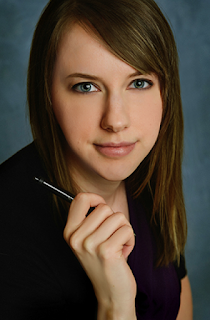 Annette Marie is the author of the Amazon best-selling YA urban fantasy series Steel & Stone, which includes the 2015 Goodreads Choice Award nominee Yield the Night. Her first love is fantasy, but fast-paced urban fantasy and tantalizing forbidden romances are her guilty pleasures. She lives in the frozen winter wasteland of Alberta, Canada (okay, it's not quite that bad) with her comparatively sensible husband and their furry minion of darkness—sorry, cat—Caesar. When not writing, she can be found elbow-deep in one art project or another while blissfully ignoring all adult responsibilities.