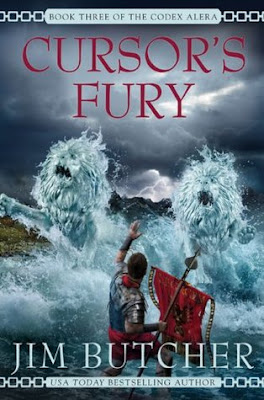 The power-hungry High Lord of Kalare has launched a rebellion against the aging First Lord, Gaius Sextus, who with the loyal forces of Alera must fight beside the unlikeliest of allies-the equally contentious High Lord of Aquitaine.
Meanwhile, young Tavi of Calderon joins a newly formed legion under an assumed name even as the ruthless Kalare unites with the Canim, bestial enemies of the realm whose vast numbers spell certain doom for Alera. When treachery from within destroys the army's command structure, Tavi finds himself leading an inexperienced, poorly equipped legion-the only force standing between the Canim horde and the war-torn realm.

“Know your enemy. Know yourself. Only then may you achieve victory.”

Cursor's Fury is another great ride by Jim Butcher. By now, all these characters are firmly developed. In difference with his Dresden series, the main characters are separated. Each group has their own missions or purposes.

Tavi was expecting to see his aunt, uncle, and Kitai after planning a reunion with them but instead, he's sent by Gaius Sextus on an undercovered mission to a newly formed Aleran legion. Tavi is sent under the name of Rufus Scipio and he is impersonating a logistic officer.

Bernard and Amara are sent to retrieve the prisoners Lord Kalare took to his lands. They are forced to work with Lady Invidia Aquitaine, Odiana, and Aldrick.

Isana is left to recover after a mental attack leaves her weak. Then, she is desperate to save the life of Araris Valerian/Fade, who's infection could prove lethal.

As with its predecessors, Cursor's Fury has great humor, amazing fight scenes and an amazing cast of characters.

“Senator. If you call my friend a liar one more time, I will take it badly."
"Excuse me?" Arnos said, his eyebrows rising up.
"I suggest you find an alternate shortsighted, egomaniacally ridiculous reason to blatantly, recklessly ignore an obvious threat to the Realm simply because you don't wish it to exist. If you cannot restrain yourself from base slander, I will be pleased to meet you in juris macto and personally rip your forked tongue from your head.”

Tavi has grown up to be a good friend, a brave cursor and an exceptional fighter.

The best twist for me was Valiar Marcus. I didn't see it coming. It left my mouth open. I love Jim Butcher's mind. This is only going to make the series much more interesting.

“You beg fate to make your fears into reality, Aleran. But for the moment, they are only fears. They may come. If so, then face them and overcome them. Until then, pay them no mind. You have enough to think on.”