The Bear and the Nightingale
by Katherine Arden 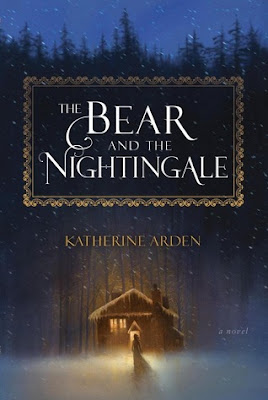 A magical debut novel for readers of Naomi Novik’s Uprooted, Erin Morgenstern’s The Night Circus, and Neil Gaiman’s myth-rich fantasies, The Bear and the Nightingale spins an irresistible spell as it announces the arrival of a singular talent with a gorgeous voice.At the edge of the Russian wilderness, winter lasts most of the year and the snowdrifts grow taller than houses. But Vasilisa doesn’t mind—she spends the winter nights huddled around the embers of a fire with her beloved siblings, listening to her nurse’s fairy tales. Above all, she loves the chilling story of Frost, the blue-eyed winter demon, who appears in the frigid night to claim unwary souls. Wise Russians fear him, her nurse says, and honor the spirits of house and yard and forest that protect their homes from evil.After Vasilisa’s mother dies, her father goes to Moscow and brings home a new wife. Fiercely devout, city-bred, Vasilisa’s new stepmother forbids her family from honoring the household spirits. The family acquiesces, but Vasilisa is frightened, sensing that more hinges upon their rituals than anyone knows.And indeed, crops begin to fail, evil creatures of the forest creep nearer, and misfortune stalks the village. All the while, Vasilisa’s stepmother grows ever harsher in her determination to groom her rebellious stepdaughter for either marriage or confinement in a convent.As danger circles, Vasilisa must defy even the people she loves and call on dangerous gifts she has long concealed—this, in order to protect her family from a threat that seems to have stepped from her nurse’s most frightening tales. 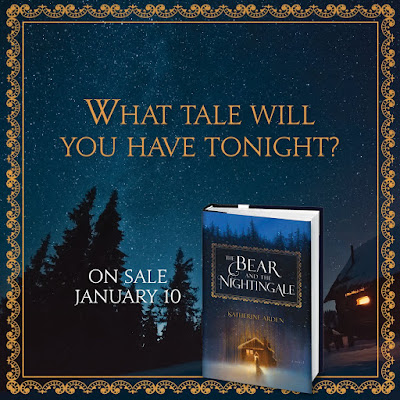 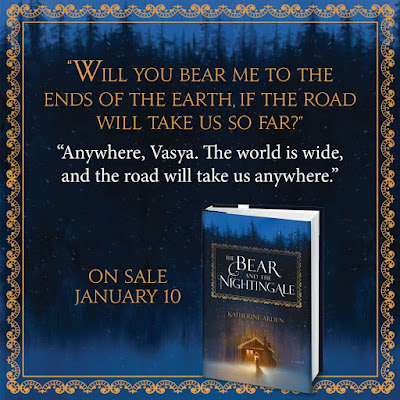 HOLY MOLY, THIS BOOK WAS GREAT. The Bear and the Nightingale started off a little slow, but I quickly became addicted to the story. I felt like this book consumed me. I finished this book in one sitting because I couldn't fathom the idea of not knowing what was going to happen next. This book was so immersive and exquisitely written. The author's writing style was breathtaking and incredibly detailed. I felt like I was in the cold Russian winter right along side of the characters. The author obviously did a lot of research on Russia, it's fables, culture, and history. Her expertise created a lush and addictive world and plot. I absolutely loved the fantasy, folklore, and historical aspects of this novel. I was completely enthralled with those elements, and I want MORE of them.The Bear and the Nightingale developed at a slow pace. The slower pace of this novel allowed a lot of time to get to know and understand the characters, myths, and culture. There were parts of this book that were a little too slow for my tastes. I think it was because those slow moments were about characters I didn't really care for. I just wanted to get back to Vasya. I also would have liked a little more action in this book, so hopefully book two will deliver on that front! The main character, Vasya, was my favorite character in this book. I loved her spunky attitude and her sense for adventure. Vasya was courageous, brave, kind, thoughtful, and giving. I really admired how much she cared for her family members and her village. It was easy for me to root for Vasya throughout the book! I loved her chapters and seeing what she was getting herself into. I cannot emphasize enough how awesome she was.

Another element I loved in this book was the focus on family. Vasya's bonds with her family members were tested throughout this story and I thought that author handled those family ties magnificently. Vasya's relationships with her family members were heartwarming and heartbreaking at times. I CANNOT wait to see more of that in the next book!I am dying to get my hands on the next book and see what happens to Vasya and her family. I hope to see more magic and folklore in book two. There was a hinting at a potential romance that made my heart jump with excitement, so I am hoping for more development of that in the next novel.I would recommend this book to everyone, especially if you were a fan of UPROOTED by Naomi Novik.