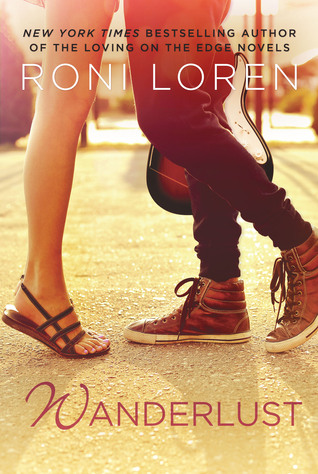 From the New York Times bestselling author of the Loving on the Edge series and Off the Clock, a story of sex, love, rock & roll, and a reporter who’s about to learn a new meaning for staying on top of her assignment...

Restaurant critic Aubrey Bordelon is never at a loss for words to describe her meals in the fancy restaurants of New Orleans. But after her magazine’s high-profile music reporter falls ill, she finds herself out of her element and in a sea of screaming fans awaiting Wanderlust’s lead singer, Lex Logan. The sound of his voice gives her goosebumps, and the stage presence of the hard-bodied rock star takes her breath away. So when he pulls her onstage for a sexy stunt, she knows she’s in real trouble.

Lex doesn’t want to pretend that the sparks on stage between him and Aubrey never happened, but it certainly makes the fact that she’s writing a story on his band all the more dangerous. The last thing he needs is some nosy reporter revealing their problems to the world. But the sexy Southern belle doesn’t give up easily, and soon he’s wondering if the best way to chase her off the story is to coax her into his bed…

Aubrey Bordelon is a food critic but when her co-worker is not able to make it to the Wanderlust concert, she is sent instead. To her surprise, she's picked by the band's lead singer Lex Logan to do a body shot. Aubrey can't believe he is able to stir feelings in her she thought lost. Too bad Lex seems to be too full of himself and her job of following the band for a week can lead her into big trouble- cough- his big arms.

Of course, things are never simple and there is more to what Aubrey wants in life and her past has an awful truth that she is not willing to share with anyone except maybe Lex.

I had a hard time getting into the story, not because of the writing but because of the premise of the Girl falling for the band Boy. The band boy is always a manwhore who falls in love with a sweet thing and nothing more. The insta-love is a huge turn off for me. Saying that there were parts I really liked. The other band members did intrigue me and I want to read their stories.
I do want to say that just because this story didn't click with me doesn't mean other people won't like it. I'm pretty sure it's going to be the opposite.

For me, the best part of Wanderlust was the epilogue. It was swoon-worthy!