The Secrets She Kept by Brenda Novak 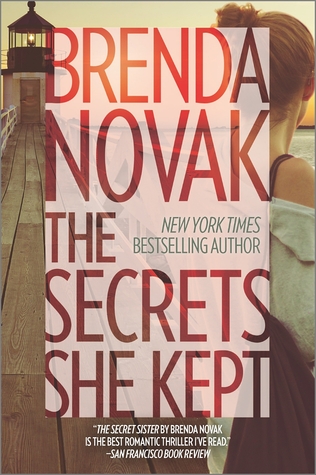 The rich and powerful Josephine Lazarow, matriarch of Fairham Island, is dead. The police say it's suicide, but Keith, her estranged son, doesn't believe it.

Keith bears scars—both physical and emotional—from his childhood, but he's worked hard to overcome the past. After walking away from his mother and her controlling ways five years ago, he's built a new life in LA. He's also accumulated a fortune of his own. But as soon as he learns of his mother's death, he returns to Fairham. He feels he owes it to his grandfather to put the family empire together again—and he's determined to find his mother's killer.

Problem is…coming home to Fairham puts him back in contact with Nancy Dellinger, the woman he hurt so badly when he left before. And digging that deep into his mother's final days and hours entails a very real risk.

Because the person who killed her could be someone he loves…

This is my first book by Brenda Novak. I knew this was going to be the second book in the series but I didn't want to wait any longer to read a book by her. I have heard positive things about her books and I was hoping I was going to like her writing. I certainly did. I started The Secrets She Kept and I didn't put it down until I was done.

The story centers around a dysfunctional family living in Fairham Island. When Josephine Lazarow is found dead, Keith, her son travels from LA back to his childhood home. It has been five years since he has had any contact with her but he knows he must be there for his two sisters. He's a successful businessman now but in the past, he was nothing but a drug addict.

Keith Lazarow is sure that his mother was murdered and he's determined to stay until he can get the answers he's seeking. He's also ashamed of the way he mistreated Nancy Dellinger, the woman who helped him when he was at his worst and whom he repaid by stealing money from.

Nancy has never moved on after Keith left her. She recently has started online dating but so far she's not attracted to any of the guys she's dating. She knows that the death of Josephine, who's also her employer,  is going to bring Keith back into her life. She knows she should avoid him but he makes it hard for her to do it when all he wants is forgiveness and to spend time with her before he leaves back to LA.

Keith, with the help of his sisters, the police, and Nancy, is determined to unravel the mystery surrounding his mother's death. Soon, some of the clues start pointing to someone close to him.

I like the way Mrs. Novak pieced together the story line. I was impressed by Keith's determination with both, the truth about his mother's death and fixing past mistakes with Nancy.

The Secrets She Kept has intrigue, romance, and suspense. I want to go back and read the first one in the series and I'm hoping the next book comes out soon too.

For a chance to win, just leave a blog post comment.
Winner USA only
Winner will be pick 8/1/16