The Aeronaut's Windlass by Jim Butcher 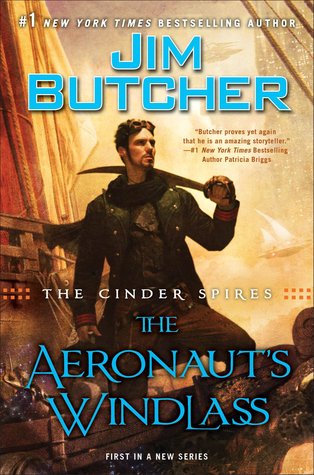 Jim Butcher, the #1 New York Times bestselling author of The Dresden Files and the Codex Alera novels, conjures up a new series set in a fantastic world of noble families, steam-powered technology, and magic-wielding warriors…

Since time immemorial, the Spires have sheltered humanity, towering for miles over the mist-shrouded surface of the world. Within their halls, aristocratic houses have ruled for generations, developing scientific marvels, fostering trade alliances, and building fleets of airships to keep the peace.

Captain Grimm commands the merchant ship, Predator. Fiercely loyal to Spire Albion, he has taken their side in the cold war with Spire Aurora, disrupting the enemy’s shipping lines by attacking their cargo vessels. But when the Predator is severely damaged in combat, leaving captain and crew grounded, Grimm is offered a proposition from the Spirearch of Albion—to join a team of agents on a vital mission in exchange for fully restoring Predator to its fighting glory.

And even as Grimm undertakes this dangerous task, he will learn that the conflict between the Spires is merely a premonition of things to come. Humanity’s ancient enemy, silent for more than ten thousand years, has begun to stir once more. And death will follow in its wake…

I'm a HUGE fan of Jim Butcher's novels. Dresden is the best series I have read and those characters are on my mind all the time. So of course, I was going to jump to the idea of reading another one of his books.

The Aeronaut's Windlass has something for everyone: Some romance, intrigue, world building, fighting scenes, banter, and of course cats! What's not to like, right?

This is Jim's beginning to a new series. Many characters have a voice. There is Benedict, who is a warrior who has a wild side.  Bridget Targwen, who at first didn't want to leave home but has developed into an awesome warrior by the end of this book. There is Gwen Lancaster who is fast to fight and has little fear. Of course, Grimm, a captain who's love is his ship Predator. His crew respects him and will go to battle if that's what he commands. Grimm is loyal to his men and to the Spire Albion even though he was forced to leave it. Master Etherialist Ferris who is crazy, but a good crazy. He's trying to stop Cavendish from destroying Albion. Folly, who's his apprentice. She's peculiar and it's only able to speak through her crystals. Last but not least, there is Rawl. Rawl is a cat. He joins Bridget when she leaves home to keep her safe. He behaves like a cat but he's also extremely smart. He stole my heart from the first scene he was in. I hope nothing happens to him. In a way, he reminds me of Mister.

“Each creature had something it excelled at, he supposed. Humans could manage knots easily, and cats could do everything else.”

In regards to the plot, the beginning of a war has started between two houses, Spire Albion and Spire Aurora. Spire Albion is the one our main characters are fighting for. We met the Aurorans, 2 of their high ranking officers and a mysterious evil woman by the name of Cavendish.

As my first Steam Punk book this one was fantastic. Pick it up if you're a fan of the genre, or if you're a Dresden fan.

I can't wait to read The Olympian Affair!

“Ah,” Bridget said, flushing slightly. As the glib-tongued lout in question, she was currently on the receiving end of this facet of the habble’s law. “I’m not sure everyone would agree with you. We’re a civilized society, are we not?” Esterbrook blinked. “Since when, miss? We’re a democracy.”