My Girl by Jack Jordan 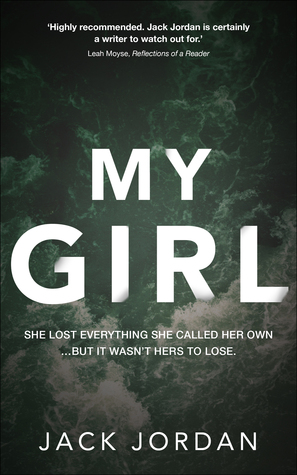 Paige Dawson: the mother of a murdered child and wife to a dead man.

She has nothing left to live for… until she finds her husband’s handgun hidden in their house.

Why did Ryan need a gun? What did he know about their daughter’s death?

Desperate for the truth, Paige begins to unearth her husband’s secrets.

But she has no idea who she is up against, or that her life isn’t hers to gamble – she belongs to me.

From the bestselling author of Anything for Her, Jack Jordan's My Girl is the new chilling thriller that you won't want to miss.

From the moment this book appeared in my netgalley radar, I knew I had to read it. It had an intriguing blurb from an author I haven't read before. Some scenes were shocking and it had a twist I didn't see coming.

My Girl features a heroine who's in a bad place since her daughter's disappearance a decade ago. Paige has sunk into a depression mixed with drugs and alcohol. Two months ago, her husband committed suicide and she has no one except her in-laws, father, and brother left. They all are trying to help her but most of the time she just doesn't care anymore. She has no reason for living.

However, just when she is ready to let go, she realizes that someone is playing games with her. At first, she's not sure because she's high or drunk all the time. When she wakes up to a video of her dead daughter, she knows something is up. She tries to get help from the detective in charge of her daughter's case but he believes it is the alcohol and drugs making her do crazy things. Then, the author pulls an amazing twist and we get some shocking news.

I had a hard time liking Paige. Some of her behavior was completely reasonable. Some was just wrong. I wished the author would have spent more time in Paige's changes after her daughter was taken from her. It was hard for me to relate to her actions in the present.  I do believe the twist was a good one and I was happy with the resolution of the story.

I can see myself reading another work by this author. My Girl had enough intrigue and suspense to entice me.