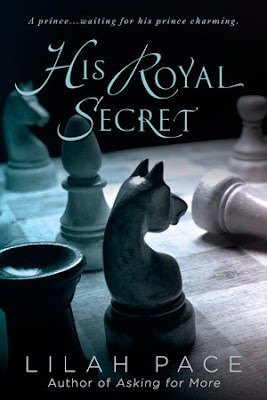 The first in an enchanting new male/male romantic duology from Lilah Pace, author of Asking for More and Begging for It....James, the handsome, cosmopolitan Prince of Wales, is used to being in the public eye. But he's keeping a king-sized secret...James, next in line for the throne, is gay.He’s been able to hide his sexual orientation with the help of his best friend and beard, Lady Cassandra. Sometimes he feels like a coward for not coming out, but he daren’t risk losing the crown. If he did, the succession would fall on his deeply troubled younger sister, Princess Amelia. To protect her, James is willing to live a lie.While on holiday, he meets Benjamin Dahan—a rugged international reporter with a globe-trotting, unattached life—who catches far more than James's eye. And when Ben is transferred to London, it seems fate may finally be smiling on James.But what began as a torrid fling grows into something far more intimate and powerful. Soon James will have decide who he is, what he wants from life and love, and what he’s willing to sacrifice for the truth...

Lilah Pace definitely knows how to write one steamy book! There was a lot of sex in this book, and I thought all of those scenes were very well written.
If you are looking for a book that will make you need to turn on a fan while reading, then this is the book for you!

At first, I felt like I wasn't going to like this book because it was so focused on sex in the beginning. However, as the book progressed, characters and feelings started to develop more. There was still a lot of sex but it was mixed in well with other storylines. I was really happy that this book didn't focus on just sex in the relationship between Ben and James. Lilah showed emotional growth within the relationship between James and Ben, which I loved. I thought Ben and James were great together! They had fantastic chemistry and their personalities meshed really well together. I want them together forever! THEY ARE SOUL MATES. SOUL MATES.
Even though I don't personally know what it is like to be royalty, I felt like Lilah nailed that aspect of James' life perfectly. Nothing about James' life seemed too extreme or made up. All of the issues James faced felt genuine. I felt so bad for James. He had a lot going on in this book and I just wanted to give him a hug! I am excited to see him develop even more in book two. I also really liked Ben. Ben was such an intriguing character. I am so interested in learning more about him.
One character I didn't really connect with was Indigo. I felt bad for her, but I had a hard time connecting with her. I would have liked some of her storyline to have been cut back to focus more on the lives of Ben and James and their romantic relationship.
Overall, I really enjoyed this book. I couldn't put this book down! I was addicted to the world, characters, and storyline from the first chapter. I am dying to get my hands on book two! I would recommend this book to anyone who is looking for a new m/m romance book to become obsessed with.