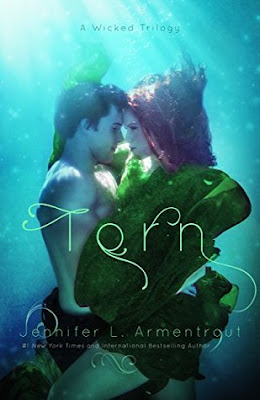 Torn between duty and survival, nothing can be the same.

Everything Ivy Morgan thought she knew has been turned on its head. After being betrayed and then nearly killed by the Prince of the Fae, she’s left bruised and devastated—and with an earth-shattering secret that she must keep at all costs. And if the Order finds out her secret, they’ll kill her.

Then there’s Ren Owens, the sexy, tattooed Elite member of the Order who has been sharing Ivy’s bed and claiming her heart. Their chemistry is smoking hot, but Ivy knows that Ren has always valued his duty to the Order above all else—he could never touch her if he knew the truth. That is, if he let her live at all. Yet how can she live with herself if she lies to him?

But as the Fae Prince begins to close in on Ivy, intent on permanently opening the gates to the Otherworld, Ivy is running out of options. If she doesn’t figure out who she can trust—and fast—it’s not only her heart that will be torn apart, but civilization itself.

Surprise, surprise, I loved this book! Seriously, I don't think Jennifer can do wrong. This book was just as good as I was expecting it to be. Jennifer expertly weaved humor, romance, action, and mystery into one beautiful story. I always know that I am going to laugh when I pick up a Jennifer L. Armentrout book, and man, I laughed A LOT while reading this book. The humor in this book just felt so natural. The dialogue flowed so well, and it never felt like it was being forced. I just love the way Jennifer seems to effortlessly include humor in almost every scene. Some of the plot lines in this book were a little predictable, but that doesn't mean I didn't enjoy the plot! I was completely addicted to this book. I read it in one sitting because I refused to put it down.

The romance in this book killed me in the best way possible. I LOVE REN AND IVY TOGETHER SO MUCH. THEY ARE SOUL MATES. THEY ARE PERFECT LITTLE ANGELS. I ADORE THEM TOGETHER. I just have a lot of strong feelings about them, okay?

The characters in this book and series are all fantastic. Each character is unique in their own way, and I love that Jennifer gives each character special quirks. All of the characters have depth to them and they all feel genuine. I care for Ivy and Tink like they are my precious children. Ren is my husband. I do love him with Ivy, but I also want him to be with me. REN IS PERFECT. HE IS KIND, SMART, CHARMING, FUNNY, PROTECTIVE, AND JUST ALL AROUND GREAT.

HOW CAN JENNIFER CONTINUE TO CREATE SUCH SWOON-WORTHY MALES? HOW DOES SHE DO IT?!

Anyway, it is easy to tell that I loved this book. Fans of Wicked and/or paranormal romances will eat this book up. I highly recommend this book and series to everyone!WHERE IS BOOK THREE?! I NEEEED IT. 5 / 5 Fangs*This ebook was given to me in exchange for a honest review. *

I lifted my right hand, reaching for my iron stake out of instinct, even though I knew it would do no good against the prince.

“You shouldn’t do that.” His voice was deep with what reminded me of an English accent. “I know you want to, but it would be very, very unwise of you, Ivy.”

Creepy Prince smiled slightly. “Your friend has been very helpful.”

That got my hackles up. I slid my sunglasses onto my forehead and forced my tone to stay calm and level. “I’m sure she has. Speaking of Val, happen to know where I can find her?”

His lips curled in a semblance of a smile as he stepped closer. The prince was tall, taller than Ren, who was pushing six foot two. My entire back stiffened as I forced myself to hold my ground, even though every instinct demanded that I run and run super fast, because he had almost killed me once before. Correction. He would have definitely killed me if he hadn’t realized what I was and had, I guessed, healed me.

“I’ve been waiting for you,” he said, instead of answering my question, his pale blue eyes fixed on mine.

My hand curled into a useless fist. “That is extremely creepy to hear.”

That cold smile returned. “Why don’t we talk? There are seats across the way.”

“Yeah, that’s not going to happen.”

The slow smile increased but never reached his eyes. “Oh, I know it is.”

Fine hairs rose on my arms.

“What exactly can you do right now?” he said in the same coldly polite voice. “Refuse me?” Creepy Prince laughed, and it wasn’t a bad sound. Again, it was something that was just cold, as if he were mimicking what a human would do. “You can’t.”

“I can.” My palm itched to grab the thorn stake secured under my pant leg, but I held still. I might be reckless, but I wasn’t stupid.

“Really? I will have to beg to differ on that. You see, humans surround us. So many of them, and I have an extraordinary appetite.” His eyes appeared to glimmer as his gaze slithered from the top of my curly head down to my toes. “A rather impressive appetite for many, many things.”

“Okay. First off, ew.” My lip curled. “Secondly, I don’t want to hear about any of your appetites.”

One dark eyebrow rose. “Oh, but you should know that I could kill twenty of these humans in less than five seconds and feed on the rest, leaving them to believe that it was this little red-headed girl who murdered these innocent people.” His voice dropped even lower as he leaned in and icy air brushed my cheek. “You deny me this, those lives will be on your hands, little bird.”

Anger flushed hotly as my eyes met his. There wasn’t a single part of me that doubted anything he said. He had me. God, I hated to admit it, but he had me.

"Drama! Action! Romance! Twists! Torn had it all...Torn was a perfect continuation of the Wicked Saga." ~Kim, Kimberlyfaye Reads

Things are about to get Wicked in New Orleans…

Don’t miss the first title in the series, WICKED!

#1 New York Times and #1 International Bestselling author Jennifer lives in Martinsburg, West Virginia. All the rumors you’ve heard about her state aren’t true. When she’s not hard at work writing, she spends her time reading, watching really bad zombie movies, pretending to write, and hanging out with her husband and her Jack Russell Loki. Her dreams of becoming an author started in algebra class, where she spent most of her time writing short stories….which explains her dismal grades in math. Jennifer writes young adult paranormal, science fiction, fantasy, and contemporary romance. She is published with Spencer Hill Press, Entangled Teen and Brazen, Disney/Hyperion and Harlequin Teen. Her book Obsidian has been optioned for a major motion picture and her Covenant Series has been optioned for TV. Her young adult romantic suspense novel DON’T LOOK BACK was a 2014 nominated Best in Young Adult Fiction by YALSA. She also writes Adult and New Adult contemporary and paranormal romance under the name J. Lynn. She is published by Entangled Brazen and HarperCollins.