MIDNIGHT SOUL is coming! Being released on August 15th, this amazing fantasy takes place in our world and a parallel universe where fantasies are true…but perhaps not all you would expect. MIDNIGHT SOUL is the highly anticipated finale to Kristen Ashley’s bestselling Fantasyland Series. As a special treat the first books in the series are on sale for a limited time only, including the first book in the series, WILDEST DREAMS, for just $.99! Pre-order this amazing novel today, and be sure to check out the exclusive excerpt below! 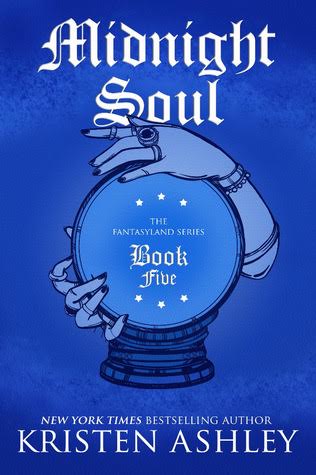 Against his will, Noctorno Hawthorne, an undercover vice cop, finds himself embroiled in magic, mayhem and parallel universes. Too late, he meets an amazing woman only to find she’s destined for his identical twin in another world.

Noc is recruited to help save that world.

What he doesn’t know is his destined love resides there.

FrankaDrakkar wears a mask. A mask she never takes off to protect herself in a world of malice, intrigue and danger.

When Franka meets Noc and he discovers her secrets, convinced she carries a midnight soul, having shielded herself from forming bonds with anyone, she struggles with accepting his tenderness and care.

When Noc meets Franka, over wine and whiskey, her mask slips and Noc knows it’s her—only her—and he has to find a way to get her to come home with him.

And then make her want to stay.

Add it to your Goodreads Now!

“You need to leave,” I declared.

His brows drew together a moment before his expression showed clearly that comprehension had dawned.

Sadly, comprehension might have dawned but he didn’t leave.

He crouched by the bed and offered in a soft voice, “You need me to carry you to the other room so you can have a bit of privacy?”

He thought I needed a chamber pot.

What was happening to my face?

The heat I felt in my cheeks could be nothing other than me blushing.

I didn’t blush. I’d never blushed. Not even when I’d set about seducing my first lover at age sixteen.

I needed to be quit of this man as soon as possible.

“Sure?” he asked kindly.

“I need you to leave, Noctorno,” I used his full name in an effort to irritate, something that worked if the flare in his eyes was any indication, “so Josette can prepare me. We’re away to Kristian’s this morning.”

Another drawing of his brows before he asked, “What?”

“After my toilette, Josette and I are to my sleigh so we can begin our journey to my brother’s home.”

His eyes got bigger as his mouth inquired peculiarly, “Are you high?”

“No,” I answered his ridiculous question unnecessarily, “Indeed, I’m low. As you can see since I’m lying abed.”

For a second he just stared at me.

Then he threw his head back and burst into loud, deep, beautiful laughter.

I wanted to throw something at him.

Unfortunately, in my current position, this was not an option open to me.

“I fail to see what’s amusing,” I noted.

He controlled his mirth only to mutter, “I’ll explain it later.” He went on more distinctly, “Frannie, you’re not goin’ to your brother’s today. Or tomorrow. Or until you’re fit. Then, maybe Valentine will spirit you there, or whatever the fuck that’s called. But for the foreseeable future, your ass is in that bed and you’re resting so you can heal.”

Who did he think he was, telling me what I would or would not do?

“As you’ve determined,” I began, “this is not the first time I’ve been in this condition so I do believe that I know best what I’m capable of and…”

I stopped speaking because he came slightly out of his crouch so he could put his face into my face and he was no longer looking mirthful.

He was looking angry.

“That was when you had no one lookin’ out for you but that’s not the case anymore. So this is how it’s gonna be,” he announced.

He then, to my shock, irritation and outrage, announced how it was going to be.

Like he had the right to tell me how it was going to be! 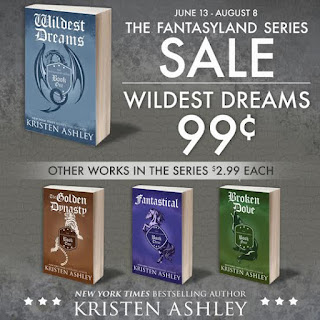 And Don’t Miss the First Books in the Fantasyland Series-On Sale Now! 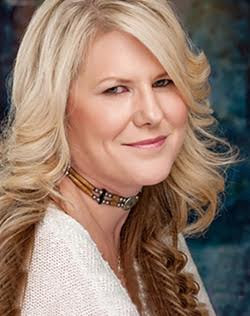 Kristen Ashley was born in Gary, Indiana, USA and nearly killed her mother and herself making it into the world, seeing as she had the umbilical cord wrapped around her neck (already attempting to accessorise and she hadn’t taken her first breath!). Her mother said they took Kristen away, put her Mom back in her room, her mother looked out the window, and Gary was on fire (Dr. King had been assassinated four days before). Kristen’s Mom remembered thinking it was the end of the world. Quite the dramatic beginning. Nothing’s changed. Kristen grew up in Brownsburg, Indiana and has lived in Denver, Colorado and the West Country of England. Thus, she’s blessed to have friends and family around the globe. Her family was (is) loopy (to say the least) but loopy is good when you want to write. They all lived together on a very small farm in a small farm town in the heartland. She grew up with Glenn Miller, The Everly Brothers, REO Speedwagon and Whitesnake (and the wardrobes that matched). Needless to say, growing up in a house full of music, clothes and love was a good way to grow up. And as she keeps growing, it keeps getting better.