His Scandalous Kiss by Sophie Barnes 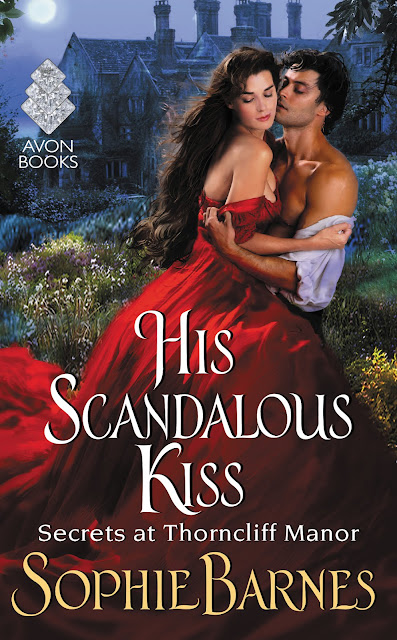 The depth of emotions, the light of the redeeming power of love and the intrigue and suspense make this third installment Barnes’ strongest tale to date.” –RT Book Reviews

Thorncliff Manor is the perfect setting for a masquerade ball . . . where the heart’s secret desires are about to be uncovered in this scintillating Regency romance from Sophie Barnes

Richard Heartly has exiled himself from society since the war, plotting his revenge for a terrible betrayal. A masked ball at Thorncliff Manor is intended to be a brief diversion. Instead, he encounters a fascinating young woman as entranced by the music as he is. He can’t reveal his identity to Lady Mary. But her siren song keeps drawing him back, and their clandestine meetings could be hazardous to his plan—and to her virtue . . .

Forcing back all thought of potentially kissing his way down the side of her neck and over the smooth skin of her shoulder, Richard struggled to gain control. “Perhaps it is the atmosphere,” he suggested. “Masquerades do have a tendency to encourage more carefree behavior.”

“I suppose it must be because of the anonymity. Hidden behind masks, people have the opportunity to do things they would not otherwise dare to consider.”

She pursed her lips, which made her look adorably cheeky. “A shy gentleman might suddenly feel emboldened, allowing him the courage he needs to ask a lady to dance.”

“I hope you are not suggesting that I might be shy, for I can assure you that I am anything but.” Not entirely true, though he preferred apprehensive.

“And yet I have no clue about your identity. In truth, you could be anyone, perhaps even a groomsman who happened to chance upon some quality clothing.”

“I see your point. But if I were a groomsman, would I be as well-read as you know me to be?” Emboldened by their light repartee, the magical touch that the evening provided, and the reminder that nobody knew who he was, Richard moved his hands to her waist and lifted her right off the ground. He heard her suck in her breath while several onlookers gasped in confounded shock. Heedless of it all, he proceeded to swing Lady Eleanor around while spinning in a wide circle.

“That was far too daring,” she chastised as soon as he set her back on her feet and resumed their previous pace.

“Tell me you did not enjoy every second of it.”

Setting her mouth in a firm line, she looked away from him. “Everyone is watching,” she eventually said, not answering his question. “My aunt does not look the least bit pleased.”

“Then it is fortunate that I care more about your opinion than I do about your aunt’s.”

The corner of her mouth twitched. “You are intolerable. What if you had dropped me?”

“A gentleman never drops a lady.” Twirling her around, he led her between two other couples.

“Perhaps not, but then again, we have not yet established that you are in fact a gentleman. For all I know, you could be a scoundrel.”

“I can assure you that I am no such thing.” Dipping his head, he whispered close to her ear. “In time, you will learn that I value honesty and dependability. That I consider a man’s honor to be paramount to his character. So I would be much obliged if you would refrain from suggesting otherwise, even if you only meant to do so in jest.

Briefly closing her eyes, she gave a little nod. “Forgive me,” she whispered, regret marring her features. “I did not mean to insult you in any way.

“I know.” The music gradually faded and their movements slowed until they came to a gliding halt. Stepping back, Richard offered Lady Eleanor a bow while she curtseyed in return. He didn’t like the tonehe’d just taken with her, but it was too late for that now. “Will you join me for a walk in the garden?” he asked, stiffly offering her his arm. He was suddenly desperate to smooth away the tight expression that he’d caused.

“As lovely as that sounds, I am not so sure that it is going to be possible,” she said, her eyes fixed on a spot directly behind his left shoulder. Turning, Richard winced as he spotted an older woman bearing down on him with Lady Duncaster in pursuit. “Your aunt, I presume?”

“Yes. With Mama and Papa abroad, I am presently under her protection.” She looked up at him with calmness in her eyes. “No need to worry. She is not as fierce as she looks. Just be polite.”

Squaring his shoulders, Richard stood his groundas Lady Eleanor’s aunt came to a halt before him. She was a slim woman with delicate features, possessing a chin that was sharper than most. Her dark brown hair was streaked with random lines of silver, and in front of her eyes, she held a lorgnette surrounded by a vast array of colorful feathers.

“Signor Antonio,” Lady Duncaster said, coming up alongside her, “May I present my dear friend, Lady Foxworth?”

“It is a pleasure to make your acquaintance, Countess.” Reaching for her tiny hand, Richard bowed over it while hoping that his gallantry would win him her favor.

“Thank you,” she said as she peered up at him from behind her lorgnette. “You clearly have me at a disadvantage. Will you please tell me who you are? I should also like to know why you presumed to have the right to dance with my niece in such a scandalous manner.”

Every muscle in Richard’s body grew taught. Was it just his imagination, or was his cravat more restrictive now than it had been earlier? With rigidity, he met Lady Foxworth’s assessing gaze. “I must apologize for allowing myself to get carried away during the dance. It was not my intention to offend anyone. As to my name . . . I am afraid that Signor Antonio will have to suffice.”

Lady Foxworth pressed her lips together in a firm line of disapproval. Beside him, Richard sensed Lady Eleanor’s surprise. Like her aunt, she’d probably expected him to reveal himself when asked to do so.

“Unfortunately that is not good enough,” Lady Foxworth said. “Not when I am responsible for my niece’s reputation.”

“I can vouch for his character,” Lady Duncaster said with a hasty look in Richard’s direction. “Signor Antonio comes from a very respectable family—a family with whom an association would be a coup.”

Raising her chin a notch, Lady Foxworth was silent for a moment and Richard realized that he was holding his breath in anticipation of what she might say next. “I have always trusted your judgment,”

Lady Foxworth eventually told Lady Duncaster, “but I am afraid that my conscience will not allow me to do so in this instance. Unless I am made aware of Signor Antonio’s exact identity, then I am afraid that I cannot allow him to continue socializing with my niece.”

Closing his eyes on the finality of her words, Richard expelled the breath he’d been holding. Silently, he cursed the fear that kept him from living and the hatred that fueled his vendetta. Because in spite of what Lady Eleanor had told him—that she had no desire to marry—the way in which she responded to him suggested that he might be able to change her mind if he was allowed the chance to do so.

“What if he confides in me?” Lady Eleanor asked, cultivating this idea.

Lady Foxworth regarded him shrewdly. “I do not believe that he is prepared to do so. Are you, Signor?”

Heart hammering in his chest, Richard forced himself not to look at Lady Eleanor. He didn’t want to see the hope brimming in her eyes or the disappointment that would take its place when he said what had to be said. “Not yet.”

As soon as the words were out, he felt as though a cavern had been carved into the ground, separating him from the woman who stood by his side. Tonight, for the first time in years, he’d felt a sliver of hope that the happy future he’d always dreamed of might one day be his—if he could only win Lady Eleanor’s affection. Unwilling to give up completely, he said, “Perhaps in time—”

“No,” Lady Foxworth said, her hand slicing the air between them. “You have every right to keep your secrets, Signor, but until I am made aware of what they are and have been reassured that they pose no threat to my niece’s reputation or happiness, then you will stay away from her. Is that clear?”

The ultimatum was not to Richard’s liking even though he understood Lady Foxworth’s reasoning completely. Had he been in her shoes, he would have made the same demand. “Yes.” He spoke the word with difficulty.

Lady Foxworth finally allowed a faint smile. “Thank you. I appreciate your understanding.”
Clenching his jaw, Richard nodded. “If you will excuse me,” he said with a curt bow directed at Lady Foxworth and Lady Duncaster. Turning toward Lady Eleanor, his heart ached at the sight of her pained expression. “It has been a pleasure.”

She gave him a bleak little nod, but said nothing in response. Turning his back on her, Richard walked away without a backward glance, his pace brisk as he strode toward the French doors leading into the house. Rushing through the well-lit hallway, he marched toward the stairs, climbing them quickly in his haste to return to his bedchamber and the darkness that beckoned within. 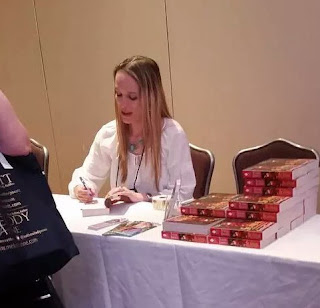 Born in Denmark, Sophie Barnes spent her youth traveling with her parents to wonderful places all around the world. She's lived in five different countries, on three different continents, and speaks Danish, English, French, Spanish, and Romanian. But, most impressive of all, she's been married to the same man three times—in three different countries and in three different dresses. When she's not busy dreaming up her next romance novel, Sophie enjoys spending time with her family, swimming, cooking, gardening, watching romantic comedies and, of course, reading.