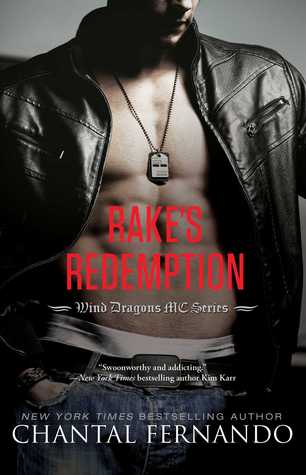 Rake is known for being up for anything, in and out of the bedroom. He’s wild, he’s deadly, yet quick with a joke or a stolen kiss. Known as the player of the WDMC, he loves women, the more the merrier. However, behind his womanizing façade, Rake hides the pain of losing his first love, Bailey. He hasn’t loved anyone since, and doesn’t think he ever will.

Seven years after their split, Rake and Bailey run into each other at the MC’s favorite club. Old wounds resurface, secrets are spilled...and passionate feelings are awakened. But they’ve each done things to hurt the other, hurt them too badly to get over it—haven’t they? Only when Bailey’s connection to Rake puts her in danger from another Club member does he realize that there’s nothing he won’t do to protect her—and claim her as his once again.

Bailey has only loved one man: Adam but now he goes by the name of Rake. He's part of the Wind Dragon MC. It has been years since they have seen each other and the first time they're in contact, Rake is nothing short of an ass to her.  Seven years ago,  they parted on unfriendly terms.. the thing is, Rake doesn't know the full story.

After their recent encounter, Bailey tries to stay away from his territory but Anna makes it hard on her. They were close friends and staying apart is not going to happen again. Bailey also worries about Rake and her daughter. He is part of an MC club and Bailey is not sure she wants that life for her and her kid.

Rake has never forgotten Bailey and it becomes really hard to avoid her, when she gets along so well with the MC women.  Later, he knows it's futile to let her go again. Once he learns the truth, his guilt is even worse.

I'd liked all the books in this series. However, this one was ok for me, not great.
The beginning was excellent but by the end I was just going through the motions. If I have to pinpoint the reason I didn't care for it, nothing really comes to mind except maybe Rake behaving very immature in a few scenes. It didn't help that he wasn't nice to Talon. To me, Talon didn't do anything bad except wanting Anna to be part of his birthday celebration. Rake had no real reason to be nasty about it. I do hope that as the series progresses Rake, Talon and Arrow get along much better.
Another reason I like this series, is the action, sadly, this one had none. I did like Bailey. She was great. She had a great relationship with her kid and she had overcome great obstacles in her short life.
Lastly, I loved Tia. I hope she gets her HEA soon.