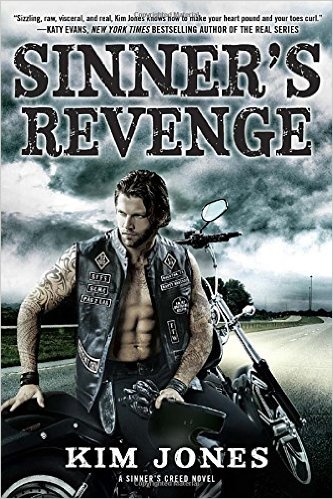 The sizzling second book featuring the Sinner’s Creed Motorcycle Club, bikers bent on riding chrome and meting out mayhem...Shady has spent the last eight years of his life dedicated to the Sinner's Creed Motorcycle Club. But after losing the man who was both his brother and his best friend, he has a new purpose—to avenge the death of the greatest nomad in Sinner’s Creed history. His plan is flawless. His mission is simple: seek and destroy. There is no room for distractions—especially a distraction like Diem. She's infuriating. Demanding. Complicated. Impossible. And for some reason, Shady can’t stay away. But he only has space in his heart for one love: Sinner’s Creed. And the club always comes first. Always.

For me SINNER’S REVENGE was one of those books that had me completely hooked once I started. I really enjoyed SINNER’S CREED (book #1) which left a gaping hole in my heart, so I was on the edge of excited and nervous to start REVENGE.

Shady has dedicated the last eight years of his life to the Sinner’s Creed MC. After losing a brother, who was also Shady’s best friend, Shady will stop at nothing to Avenge his death.

With the approval of the club, Shady takes time and meticulously plans the deaths of the men responsible. While on his personal mission, he stumbles upon hot-headed, temperamental, infuriating, Diem. The one woman who keeps Shady on his toes.

I’m such a sucker for an action packed motorcycle club story. I love the rashness, the action, the romance, and just the overall setting. Hot alpha men with a sweet side for the women they love calls for a great story! Kim Jones brought Shady and Diem’s story to life. Their struggles and their personalities clashed in the best of ways.

Diem was so much fun to read. She was confident and alpha and had a mouth on her that could compete with the men. She definitely gave Shady a run for his money.

“I’m waiting for him to give me a smirk, or for his concentration to break. But his fierce gaze never falters. It’s like he’s trying to tell me something with his eyes— something I don’t want to hear. He’s giving me a warning. He’s telling met hat this is who he is. That he’s a bad guy. That he’s no good for me, blah, blah, blah.

So I match his glare with a  glare of my own. I’m giving him a warning. I’m telling him this is who I am. That bad guys don’t scare me. And that I don’t care if he’s no good for me, because the reality is, I’m really not that good for him either.”

I’m going to stop now because I don’t want to spoil ANYTHING. SINNER’S REVENGE had some scenes and situations that had my mouth falling open with shock. I’m generally a pretty good guesser when it comes to where stories are going, but this book had me stumped…and I loved every single moment of it. I hope Kim Jone’s never stops writing MC stories!