From Kiss to Queen by Janet Chapman 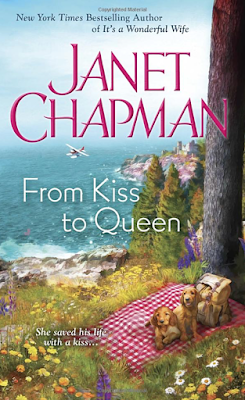 A new romance from the New York Times bestselling author of the Spellbound Falls novels...Jane Abbott knows that she's nobody special, so instead of looking for romance she's hunting partridge in the Maine woods when a plane crashes into a nearby pond. Diving in to save the pilot, Jane instinctively gives him air by way of a lifesaving kiss, and leads him to safety through a barrage of gunfire. The handsome stranger returns the favor by kidnapping her.Clearly no ordinary man, and insisting Jane's life is in danger, Mark spirits his stubborn guardian angel to an aircraft carrier in the Atlantic Ocean. Only then does she discover that the mysterious Mark is actually Prince Markov Lakeland. Soon to be crowned king of the young country of Shelikova, can Mark persuade Jane that she has what it takes to be his queen?

I went into this book wanting a light and fun romance, and that is exactly what I got! This book was a quick and charming read. This wasn't a perfect book, but it was still very entertaining. The plot of this book was what made it so addicting for me. I thought Janet did a great job at keeping the plot interesting through out the book. Some of the drama was a bit unbelievable, but it was still entertaining. The chemistry between Jane and Mark was undeniable. Every moment between them was filled with sexual tension. Janet really knows how to create chemistry between two people! The problem I had with the romance between Jane and Mark was that I thought it felt like insta-love. I wanted more of a slow burning romance. It was hard for me to believe the deep connection they had, because it seemed like they barely knew each other. I wanted more tension between them before they shared their first actual kiss. As I said, Jane and Mark definitely had chemistry, but I thought the feelings developed and were discussed way too quickly. Even though I had a hard time believing how quickly Jane and Mark fell in love, I still thought they were a cute couple by the end of the book. I thought the main character, Jane, was hilarious. I really loved her chapters in the book. I found myself laughing out loud numerous times during her narration! Mark was a charming and sexy guy. I didn't like how demanding and controlling he was at times, but I definitely liked him overall. I thought this was a fun summer read! I would recommend this to people who are looking for a cute romance novel. I am excited to check out more books by Janet Chapman in the future.