The Woman in Cabin 10
by Ruth Ware 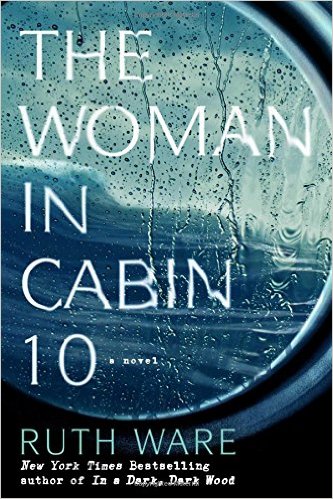 From New York Times bestselling author of the “twisty-mystery” (Vulture) novel In a Dark, Dark Wood, comes The Woman in Cabin 10, an equally suspenseful and haunting novel from Ruth Ware—this time, set at sea.
In this tightly wound, enthralling story reminiscent of Agatha Christie’s works, Lo Blacklock, a journalist who writes for a travel magazine, has just been given the assignment of a lifetime: a week on a luxury cruise with only a handful of cabins. The sky is clear, the waters calm, and the veneered, select guests jovial as the exclusive cruise ship, the Aurora, begins her voyage in the picturesque North Sea. At first, Lo’s stay is nothing but pleasant: the cabins are plush, the dinner parties are sparkling, and the guests are elegant. But as the week wears on, frigid winds whip the deck, gray skies fall, and Lo witnesses what she can only describe as a dark and terrifying nightmare: a woman being thrown overboard. The problem? All passengers remain accounted for—and so, the ship sails on as if nothing has happened, despite Lo’s desperate attempts to convey that something (or someone) has gone terribly, terribly wrong…
With surprising twists, spine-tingling turns, and a setting that proves as uncomfortably claustrophobic as it is eerily beautiful, Ruth Ware offers up another taut and intense read inThe Woman in Cabin 10—one that will leave even the most sure-footed reader restlessly uneasy long after the last page is turned.

THE WOMAN IN CABIN 10 is a gripping story about a woman who believes she witnesses a murder abroad a small intimate cruise ship.

Lo Blacklock is a writer doing a piece on a new ship called The Aurora. The ship is very intimate with only 10 luxurious cabins.  One night she’s woken by a woman’s loud scream and a splash that sounds like something heavy hitting the water. When she looks outside she notices a smear of blood on the other cabins door.

After talking to security not only is no evidence of any foul play found, but there was never anyone occupying that cabin. But Lo KNOWS that there was a woman in that cabin, and she won’t stop digging until she finds out what’s happening.

I absolutely love Ruth Ware’s writing. It isn’t fast paced but very slow burning. She weaves the story perfectly to heighten the experience for the reader, which I absolutely adore. THE WOMAN IN CABIN 10 kept me guessing throughout the whole book.

One thing I really enjoyed about this book was the intimacy of the characters. There were 10 cabins, and a handful of other staff members. The motives of the characters were unknown and made me question everyone. When I thought I had a good grip on what was going on, another character or situation would shine and prove I was completely off course.

Ruth Ware has created another clever, unique, and well thought out novel. I really enjoyed IN A DARK, DARK WOOD (Ruth’s first novel), but was completely blown away by the chill factor in THE WOMAN IN CABIN 10.