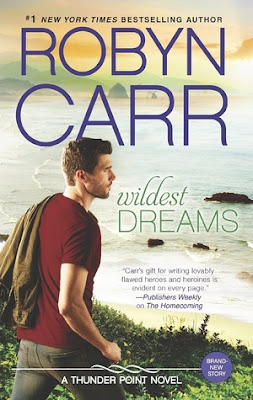 I'm a newbie to Robyn Carr's style of writing but, I know that I'm going to want to read all of her books already. She has the ability to multitask. We get many couples updates through the main couple's love story. In this case the MC is Blake Smiley and Lin Su Simmons.

Lin Su Simmons is the home nurse hired by Grace to take care of her mother Winnie, who has ALS. She is very competent but she is hiding multiple secrets, mostly from her son Charlie. She also worries about Charlie's health since he has asthma and has had pneumonia many times. Money is tight until Lin Su starts working for Winnie. Soon she has new friends, people to rely on and a safer environment for her son.
Charlie also makes new friends. One of them is the triathlete Blake Smiley.

Blake picked Thunder Point as his new home. His beginnings were similar to Lin Su. Presently, he's a world renown professional athlete. He's determined to win one of the races and training is his main goal until Charlie and Lin Su enter his life. He likes to spend time with Charlie and once he decides Lin Su's stubbornness isn't too bad, he likes being around her.

I enjoyed Wildest Dreams now that I have met more of the characters from prior books.
Lin Su and Blake both had emotional scars. I think they both understood each other and once she stopped seeing him as an interference in her child's health, she recognized how many things they had in common.  Charlie is a good kid. I understand why he wants to learn more about his roots. He has a very inquisitive mind.

As secondary characters go, I liked Winnie a lot and I feel sad that her disease is progressing.
Grace is sweet and I'm glad she has helped at the flower shop, now that she has hired an interesting character.
I wonder if Lin Su's adopted sister is going to get her own HEA.