Release Day Event
Before We Were Strangers
by Renee Carlino 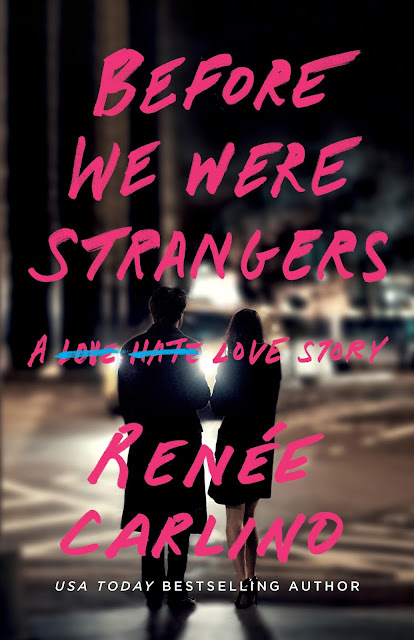 From the USA TODAY bestselling author of Sweet Thing and Nowhere But Here comes a love story about a Craigslist “missed connection” post that gives two people a second chance at love fifteen years after they were separated in New York City.

To the Green-eyed Lovebird:
We met fifteen years ago, almost to the day, when I moved my stuff into the NYU dorm room next to yours at Senior House.
You called us fast friends. I like to think it was more.
We lived on nothing but the excitement of finding ourselves through music (you were obsessed with Jeff Buckley), photography (I couldn’t stop taking pictures of you), hanging out in Washington Square Park, and all the weird things we did to make money. I learned more about myself that year than any other.
Yet, somehow, it all fell apart. We lost touch the summer after graduation when I went to South America to work for National Geographic. When I came back, you were gone. A part of me still wonders if I pushed you too hard after the wedding…
I didn’t see you again until a month ago. It was a Wednesday. You were rocking back on your heels, balancing on that thick yellow line that runs along the subway platform, waiting for the F train. I didn’t know it was you until it was too late, and then you were gone. Again. You said my name; I saw it on your lips. I tried to will the train to stop, just so I could say hello.
After seeing you, all of the youthful feelings and memories came flooding back to me, and now I’ve spent the better part of a month wondering what your life is like. I might be totally out of my mind, but would you like to get a drink with me and catch up on the last decade and a half?

Matt and Grace met in college. Graceland Marie Starr is a chello musician and Matthias William Shore is a photographer. They live next to each other. Grace has no money and she has plenty of problems at home. Matt defied his father and instead of becoming a lawyer, he decides to follow his passion, photography. The build up of their attraction was perfectly done and believable. No insta-love for this couple. They took their time. First friends, then lovers.

Months later, Matt must follow his dream and agrees to join a National Geography internship in South America. They promised to keep in touch. For reasons, unknown to them, their communication fails and they go on with their lives.

Fifteen years later, they see each other in a subway station. She's inside already, the door closes, they locked eyes, she whispered his name and then she is gone (must become a movie people!). Matt uses a Missed Connections add as a way to send her a message. And the rest is history...nope, not so much.

This is a second chance romance with Renee Carlino doing a beautiful job at describing the angst and missed connections these characters have.
Grace was a free spirit. She was sweet and loyal to her family. She would rather go hungry than let her little sister miss something. She fell in love with Matt. Fell hard for him. He was IT for her. When she reconnects with him, she can't believe it and she is careful with her emotions. Who can blame her?

Matt loved Grace, of that I'm clear. He cared for her and I felt how much he missed her in his life. Thinking about her is never too far from his mind. I felt his despair when they were not together. He also had to process the secrets which were kept from him. So much wasted time....

In the end, I was super happy with the way the story ended.

New York is it's own character in this love story and I loved she was part of it. The cover is one of my favorite scenes in this book. So it's City Hall.

"You're my first muse, Grace."

BEFORE WE WERE STRANGERS was everything I love about reading. I was completely enthralled by Grace and Matt’s story that I was unaware of everything that was going on around me.

Matt and Grace meet their senior year of college and have a fast, intense connection. After that first day of meeting they become inseparable exploring New York City… and each other.

Fifteen years later while Matt is boarding the subway he sees Grace as the doors are closing.  For a month he goes on the same train looking for another glimpse of Grace and a chance to catch up.

When he ends up empty he decides to put a missed connections add on Craig’s List in hopes that she will find the add and reach out.

Matt keeps wondering what happened 15 years ago and why he still can’t get Grace off his mind? This second chance romance is about young everlasting love, heartbreak, and even secrets and lies… you do not want to miss it.

Wow.  This story will stay with me forever.  When I started reading Before We Were Strangers I knew it was going to be one of my favorites.  Matt and Grace were so amazing and magnetic together that I couldn’t help but fall in love with them.

Grace was the kind of character I love to read about.  She’s determined, strong willed, independent, and sweet.  She marched to the beat of her own drum, which is always entertaining to read.

“You can’t recreate the first time you promise to love someone or the first time you feel loved by another. You cannot relive the sensation for fear, admiration, self-consciousness, passion, and desire all mixed into one because it never happens twice.”

This story starts out in the present then goes back 15 years to when they were in college.  Then it flashes back to the present to finish the story.  The structure was perfect.  I feel like I received plenty of information about their past to truly understand their future and feel the love, intense connection and heartbreak.  I’m so sad that Matt and Grace’s story is over but I’ll be definitely be visiting them again soon.  This is one I could reread every year. 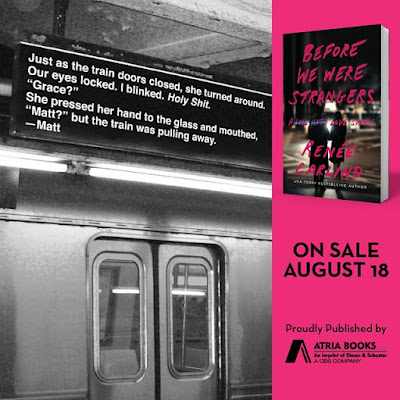 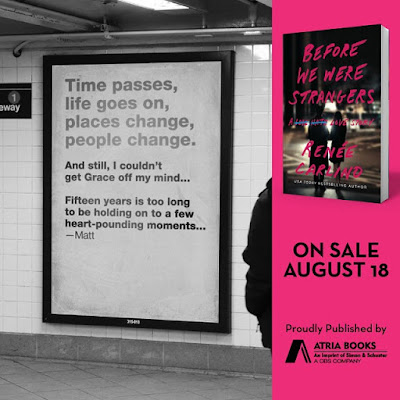 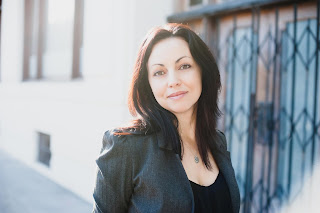 Renée Carlino is a screenwriter and bestselling author of romantic women's novels. She lives in Southern California with her husband, two sons, and their sweet dog June. When she’s not at the beach with her boys or working on her next project, she likes to spend her time reading, going to concerts, and eating dark chocolate.

Email ThisBlogThis!Share to TwitterShare to FacebookShare to Pinterest
Labels: Review Before We Were Strangers by Renee Carlino, Release Day Event