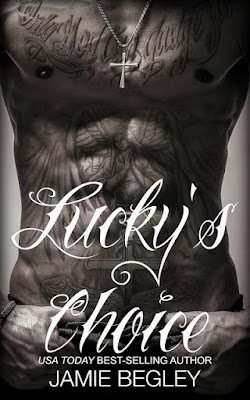 I have been reading this series since it's beginning. I have wanted Lucky and Willa's HEA for a while now. I couldn't contain my excitement when I got the ARC. Yay, me!!!

Lucky is enjoying his freedom as a Last Rider brother but he truly is not happy. He misses preaching as a pastor and also, he doesn't want to admit he's attracted to Willa. He's rude to her and he tries to discouraged her advances. Only when some of his other "brothers" start snooping around her is when he decides he needs to put a stop to it. And when Willa needs someone to help her, Lucky doesn't hesitate to step up the plate.

Willa killed a man and now she is raising his kids. At first she does it out of guilt but soon she starts caring for the kids. She loves to bake and making money from it is just the icing on the cake. She has a problem with her body. She knows she is not thin and she doesn't think a man like Lucky could be attracted to her. Avoiding him is her best way of dealing with her feelings. Nonetheless, when he offers his help she is unable to refuse him.

I enjoyed Jamie Begley's world so much that I found myself reluctant to read her books too fast. I savored every detail and laughed at her funny scenes throughout her books. There are plenty of instances during this story too.  For example, Willa's comments under her breath had me laughing every single time. I like that she has developed a back bone and my favorite scene hands down is when Willa losses it in the kitchen. I laughed how the big dangerous man all cowered when she let them have it.

I have liked Lucky since Razer's Ride. He can be thoughtful. He has honor and he is loyal. Once he was not afraid to reveal his feelings for Willa, he was the Lucky I wanted to read about. He also had to deal with his love for the MC and the love for preaching. In the end, I think everything worked out the way it should.

In regards to the secondary characters:

Shade was great in making Lucky loose his patience. Nothing escapes him and he's can manipulate the rest - usually with the best intentions.
I laughed when Lilly finally met a cowboy. Run cowboy run!
Killyama and Train need to have their book now. Her broom scene made me laugh so hard.
I'm happy Rachel has her gift back. She is one of my favorite characters.
I don't like Bliss but I kind of want to know more about her book now (don't lynch me). I like her HEA.
King was helpful in making Lucky get jealous. His explanation to his lack of housework was awesome.
Sex Piston and the bitches cameos were all great.

A complimentary copy was provided by the author in exchange for an honest review.
Posted by MrsLeif at 8:00 AM