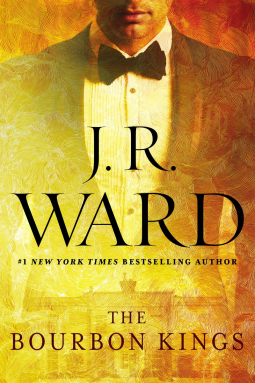 I knew this book was going to be different from any other JR Ward's work and I was excited to read it. I love her BDB series and her romance novels as Jessica Bird.

This one plays more like a Dynasty or a Falcon Crest soap opera if you will. We have a Bourbon empire, a despicable patriarch, an absent mother, and the siblings dealing with their own battle scars and broken spirits.

The first book features Jonathan Tulane "Lane" Bradford. He is the younger of the male siblings. When we first meet him he's in NYC gambling and staying on his best friend's couch. He has been there for two years. Only to leave NYC for his home estate, Easterly when someone dear to him is sick.

Lizzie King works as the main horticulturalist for the Bradford's estate. She fell in love with Lane two years ago, only to loose him. He hurt her deeply and she is not going to give him a second chance. This of course, doesn't last long. Their feelings for each other run too deep to have disappeared. Lane wants to fight for Lizzie but he might not be able to win her back with so much evil surrounding them.

This is an interesting saga. The family makes dysfunctional look good. We have four siblings trying to survive the best they can.

I'm not too sure why Lane had to run away after he broke Lizzie's heart. I don't like that over the last two years he hasn't done anything productive with his life. He has spent his time drinking and gambling. I saw a few instances when he started to take control of his life and those glimpses gave me hope.

I don't understand why Lizzie stayed employed by the Bradfords. If it was me, I would have said "Sayonara losers" a long time ago. No garden is good enough reason to be confronted with Lane's wife on a daily basis.

In regards to the other siblings:

Gin, the only sister, is spoiled and never learned to take care of herself. Regardless of this, I liked her and felt sorry for her. But, I don't agree with her "way out" at all. What happened to her made me mad and upset. Keeping quiet is NEVER the answer.

Edward, the oldest brother is a broken soul and I immediately fell for him. He needed someone to love him deeply and help him overcome all his obstacles. He deserved happiness. For me, he was the most interesting character. I'm not sure who his HEA is. Sutton is definitely a contender.

Max is still missing in action. He was mentioned a few times and we saw a glimpse of him as a child, and Lane alluded to some of his darker side but nothing else except Tanesha Nyce asking about him. (HEA?).

“You’re the love of my life, whether you’re with me or not.”

Cliffhanger: In a way yes. The story is not close to done.

THE BOURBON KINGS by J.R. Ward was unlike anything I expected.  And I loved every single minute of it.  It was gritty, suspenseful and even romantic.

For generations, the Bradfords have been one of the largest bourbon producing families in the world.  Lizzie King works for the Bradford home as the head gardener.  For the last two years she’s been hiding heartbreak from none other than Tulane Bradford.

Lane Bradford is one the Bradford sons and has been living in NYC for the last two years.  When Lane gets a phone call that forces him back home to Kentucky he has to face everything he’s left behind. . . a wife, a heart broken ex-girlfriend, a broken older brother and a father that may be guilty of several horrendous crimes.

THE BOURBON KINGS is told in typical J.R. Ward style with alternating POV’s.  The writing is as always impeccable and completely captivating.  You won’t be disappointed.

I absolutely loved this book.  J.R. Ward generally writes with several different POV’s that I absolutely adore.  It’s fascinating to be able to read about the different angles of the story.

When I first started reading and met Lizzie I loved that she was grounded.  She works hard for her money and was genuinely a nice person.  I also loved that Lane was born into the family richness, but he wasn’t like the prestigious snobs that lived at the estate.

I’m so anxious to read the next story and figure out some of the mysteries that weren’t explained in book one! Book two can’t come out soon enough!