Before We Were Strangers
by Renee Carlino 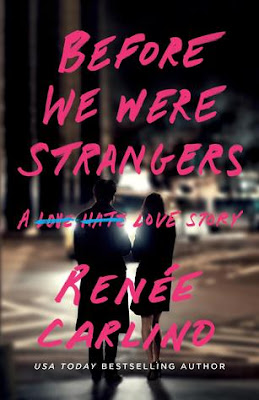 Matt and Grace met in college. Graceland Marie Starr is a chello musician and Matthias William Shore is a photographer. They live next to each other. Grace has no money and she has plenty of problems at home. Matt defied his father and instead of becoming a lawyer, he decides to follow his passion, photography. The build up of their attraction was perfectly done and believable. No insta-love for this couple. They took their time. First friends, then lovers.

Months later, Matt must follow his dream and agrees to join a National Geography internship in South America. They promised to keep in touch. For reasons, unknown to them, their communication fails and they go on with their lives.

Fifteen years later, they see each other in a subway station. She's inside already, the door closes, they locked eyes, she whispered his name and then she is gone (must become a movie people!). Matt uses a Missed Connections add as a way to send her a message. And the rest is history...nope, not so much.

This is a second chance romance with Renee Carlino doing a beautiful job at describing the angst and missed connections these characters have.
Grace was a free spirit. She was sweet and loyal to her family. She would rather go hungry than let her little sister miss something. She fell in love with Matt. Fell hard for him. He was IT for her. When she reconnects with him, she can't believe it and she is careful with her emotions. Who can blame her?

Matt loved Grace, of that I'm clear. He cared for her and I felt how much he missed her in his life. Thinking about her is never too far from his mind. I felt his despair when they were not together. He also had to process the secrets which were kept from him. So much wasted time....

In the end, I was super happy with the way the story ended.

New York is it's own character in this love story and I loved she was part of it. The cover is one of my favorite scenes in this book. So it's City Hall.

"You're my first muse, Grace."