A Taste of Sugar (Sugar, Georgia #3) by Marina Adair 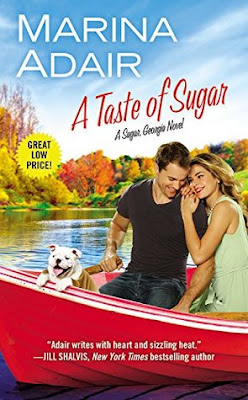 This is book 3 in the Sugar, Georgia series.

Charlotte Holden is the local pediatrician and the current regent of the Sugar Peaches organization. She has dedicated the last four years of her life to the hospital and has opened the Grow Clinic, a place were children can get their rehab. When Jason McGraw shows up in town to tell her they are still married under the law, Charlotte's world is shaken. Jason is the only man she has loved and four years ago Jace walked out on her without much of an explanation leaving her heartbroken. She thought they had an annulment but the paperwork was never entered in the system.

Jace McGraw is the bad boy in the McGraw family. He's back in town to dissolve his marriage. He left Charlotte because he didn't think he was good enough for her. Currently, he needs a new loan to buy a garage business in Atlanta and the bank won't give him a loan unless he can prove he's single. He has one purpose, obtain the annulment and walk away from the town that brings too many memories. But, one look at Charlie and his priorities shift. He never stopped caring for her and just maybe she feels the same.

I love this series. It was great to read about the other brothers and his significant others. Payton was sweet in this one.

Charlotte was committed to the hospital and the Grow Clinic project. So, I was a little surprise that she let her dad push her around.

Jace realized pretty soon he wanted Charlotte in his life and he told her exactly what he was feeling which won many points with me.
I wonder if the Sherif and a certain mechanic are next.