Don't Get Me Wrong
by Marianne Kavanagh 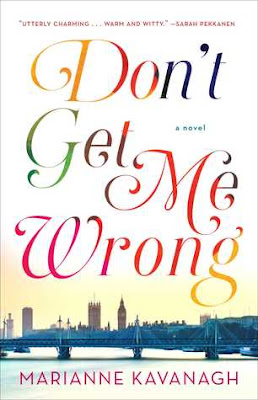 Don't get me wrong centers on the life of two sisters: Kim and Eva. Kim is the younger one. She is all about saving the world while Eva is more like a hippie sister. When they were younger, Eva met a boy, his name is Harry and they become fast friends. Kim instantly dislikes him and any time she is in close contact with him,  she can't help but fight with him.  Harry represents every thing Kim hates. He is a banker, he is rich. He believes money brings him security.  When Eva's health declines, Kim and Harry have to put their grievances aside to make Eva happy.

This is a women's fiction novel. It's set in London and follows these siblings for about a decade. At the beginning of the book, the year is 2015. Then, we go back in time to learn more about their childhood and then their adulthood. Through the book Harry and Kim are enemies. They are unable to be cordial with each other for too long. There are many misunderstandings which kept Kim and Harry apart.

I had issues liking Kim. I thought she was impulsive and was unable to carry a conversation with Harry without behaving like a spoiled brat. She thought she hated him because he had money. On the other hand, she was putty in her boyfriend's hands. She was manipulated by him for years. But, hating Harry for working, having money and caring for her sister was a crime to her.

Harry worked hard to be where he was. He was lonely until he meets Eva. He becomes her knight in shining armor multiple times. He was always there for her. She was his true friend and confident.

It bothered me that Eva never clarified her situation with Harry to her sister. Many things could have been avoided with a good channel of communication. Too many years were wasted.
The end left me wanting for more.......