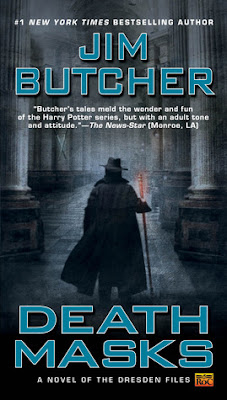 Slowly but surely, I'm going through these. Kudos to Jim Butcher, his world building is amazing. The character development is constant.

Harry gets hired to recover the Shroud of Turin. He has to stop it from getting into evil hands.
Nicodemus Archleoneis is the big baddie. He's the leader of the Order of the Blackened Denarius. He knows about Harry and he wants him out of the picture. Nicodemus won't underestimate Harry like others have. Michael and the rest of the Knights of the Cross are trying to prevent Harry from taking the case. They are not sure if they can keep him alive.
Susan is back to settle things with Harry which I thought was necessary. Harry needs to move on.

As soon as I start one of the Dresden Files I know Harry is going to be fighting multiple characters/situations. He's going to be betrayed sometimes. He will blame himself about something or someone getting hurt. He's going to be either hot or cold and very hungry and tired. Women are going to be his downfall (in a way). And you know what? I love it. This formula works for me.

I like so many characters now. Michael and his absolute faith, Charity and her tolerance for Harry, Thomas, who's sexy and funny. I can add Kincaid and the Archive to the new characters I enjoy.  I do like Susan but I think Murphy is the one in the end for Harry. You know who surprised me? Marcone. I want more of him in the books. The wolves weren't a big part of Death Masks and I missed them. I feel like Nicodemus is going to stay for a while in many books to come. He is too evil to disappear.