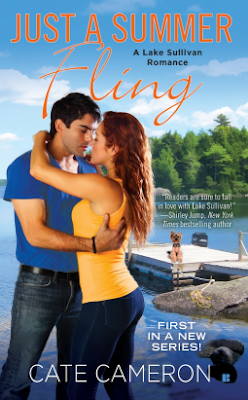 Ashley Carlsen is taking a well needed vacation at Lake Sullivan. She recently broke up with her boyfriend after she caught him cheating. She has been acting her whole life but she wishes to get out of romantic comedies and do something that she can be proud of. She has been staying with Jasmine, someone very influential in the Hollywood community. But, after making a fool of herself with sexy handyman Josh Sullivan with too many alcoholic drinks and a dare by Jasmine, she knows it is time to rent her own place.

Josh Sullivan is tired of the "summer people". He's tired of being used by rich women. Yes, he made mistakes. He thought the women cared about him but he soon realizes he was being used. Ashley, the Hollywood actress is probably just doing the same.  He won't play her game. Not ever.

~~
At the beginning of the book I wasn't sure if I was going to like it. I thought the miscommunication issues dragged on for too long. However, the more the book progressed, the more I found myself being entertained by it.

Josh was an enigma to me. On one hand he was serious, hard worker, professional, quiet and brooding (most of the time)  yet, he was also someone who had multiple affairs in the past. I guess when the book begins he is more mature and has learned from past mistakes.

Ashley was funny, sweet and perseverant. She was there for Josh when he needed someone to care for him literally and figuratively.