A Taste of Sugar (Sugar, Georgia #3)
by Marina Adair 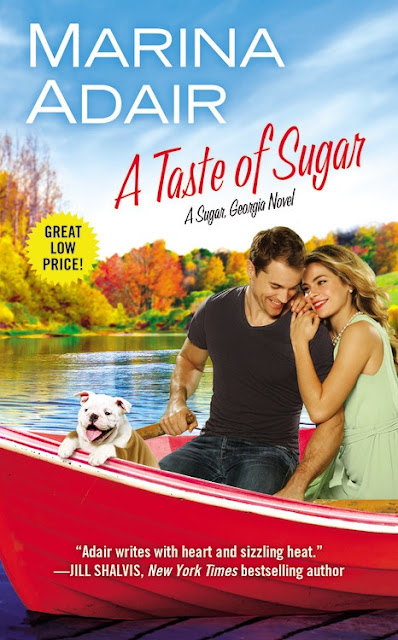 A TASTE OF SUGAR by Marina Adair (August 25, 2015; Forever Mass Market; Sugar, Georgia #3)
A blast from her past…
Charlotte Holden, Sugar’s favorite pediatrician, knows better than anyone that love only leads to heartbreak. Instead, she’s focused on creating the Grow Clinic, an outpatient center for children. All she has to do now is to host the best Founder’s Day Parade in the history of Sugar, Georgia, to win over a big-city donor. Easy as peach pie. Then sexy Jace McGraw blows back into town and utters those three words every woman dreads: we’re still married.

…leads to tantalizing trouble
Jace McGraw was making an offer on his dream business in Atlanta when he was told that his wife had some credit issues. Wait, his wife? The annulment went through years ago—or so he thought.  He’d walked away only to keep his troublemaker reputation from ruining her dreams. But now that they have a second chance, Jace offers Charlotte a deal: he’ll grant a discreet divorce in exchange for 30 days and nights of marriage. Because this time he isn’t going to let her go without a fight.

“You can’t work here,” she said, angry that he hadn’t called to warn her he was coming home. He at least owed her that.
“Can and do.” He grabbed a rag off the hood of the car and wiped off his hand, then stuck it out. “Jace McGraw, Sugar’s newest resident mechanic.”
She swatted his hand away. “Since when?” Because Jace didn’t do home visits. And he didn’t stick around one place long enough to be a resident of anywhere.
“Since today.” He cupped the bill of his hat and pulled it lower on his head. “Let me guess, you’re here as the official Sugar welcoming committee. Where’s my pie?”
“What pie?”
“Pie? Something in a covered dish? You know, all those neighborly things people are supposed to do when someone comes to town.” He looked at her empty hands and then without a word his eyes dropped to her skirt and there went the other dimple—and her good parts. “Unless there’s something I can do for you, Charlie?”
The way he said her name in that low, husky timbre, almost whispering it while flattening the vowels, reminded her of a different time, a time when she naively thought he’d meant it. But she wasn’t that wide-eyed woman anymore. She knew what he was offering, and what he wasn’t capable of giving.
After all, once upon a time she’d been married to him. Yup, Charlotte Holden had fallen in love with and married the town’s biggest bad boy. Not that anybody except the two of them knew, since it had ended as fast as it had begun. But those few weeks as Mrs. Jace McGraw had been the most amazing of her life—and what had followed had nearly broken her.
“Yes,” she said. “You need to leave.” Because wasn’t that what he did best?
The briefest frown flashed across his face, and he grabbed some kind of wrench doohickey and busied himself with tinkering under the hood. “Wish I could, but it seems like my services are needed in Sugar for a bit.”
Charlotte didn’t know what hurt more, that he wanted to leave as much as she wanted him gone—which was ridiculous since him being here, during the most important time in her career, was a disaster waiting to happen—or that, after all the time she’d spent praying he’d come back to Sugar, he finally had. Only it wasn’t for her.
“That doesn’t work for me,” she said.
“Well, this isn’t about you. Now is it?” He wasn’t even looking at her but tightening some bolt inside the engine.
Which was a good thing since she was pretty sure her eyes went glassy at his comment, because at one time he’d made her believe that everything he did was for her. Including walking away from their marriage.
“I need to go. So if you could just point me in the direction of my keys.”
“See here?” Jace walked over to her car and squatted down. She did her best not to notice the way his jeans cupped his backside—tried and failed. He filled out a pair of Levi’s like nobody’s business. “Teeth marks. Looks like you got yourself a raccoon or possum problem.”
Seems she had lots of pest problems these days. “So can you just throw some new tires on it and I can be gone?”
“You don’t need new tires, what you need are new valve stems.” And wasn’t that just like a man, telling her what she needed. “Which for your sporty, two-door tiara on wheels is a special order. Imagine that.”
“So what you’re telling me is that I’m stuck here? With you. And my car won’t be ready until—”
“Best-case scenario, end of the week.”
She let out a completely undignified huff and resisted the urge to stomp her feet. She’d begged the universe for a way out of dinner, and apparently whoever was in charge of granting wishes had chosen today to listen.
She looked at her phone, considered calling Ben, and then realized she could only handle one man from her past at a time. Plus, he was on a date with the new nurse from radiology, which meant Charlotte was stranded. Something that must have shown on her face because Jace set the tool down and stepped closer—so close he was all up in her personal space, which did crazy things to her emotional space.
“I can take you home.” He looked at her buttons and back into her eyes. “Or I can take you across the street to the Saddle Rack and buy you a drink.”
Then he did something he hadn’t done in over four years, he cupped his palms around her hips and drew her to him, and damn it if she didn’t shuffle closer.
“Why would I let you buy me a drink?” she asked quietly, although her brain kicked off a hundred and one reasons on its own. The first being that was how their relationship had started.
Charlotte had been a stressed-out resident in Atlanta, lonely and so homesick it hurt, when she’d walked into a bar and seen Jace. He flashed her that bad-boy smile, bought her a drink, then another, and before she knew it he had sweet-talked her into his bed, then down to the Justice of the Peace.
“Because I think you could use a shot of something strong right now,” he said. “And we need to talk.”
“You lost the right to tell me what I need a long time ago. As for that talk you want, you’re about four years too late.”
“Not according to the great state of Georgia,” he said, and her stomach dropped. “Since legally we’re still married.”

This is book 3 in the Sugar, Georgia series.

Charlotte Holden is the local pediatrician and the current regent of the Sugar Peaches organization. She has dedicated the last four years of her life to the hospital and has opened the Grow Clinic, a place were children can get their rehab. When Jason McGraw shows up in town to tell her they are still married under the law, Charlotte's world is shaken. Jason is the only man she has loved and four years ago Jace walked out on her without much of an explanation leaving her heartbroken. She thought they had an annulment but the paperwork was never entered in the system.

Jace McGraw is the bad boy in the McGraw family. He's back in town to dissolve his marriage. He left Charlotte because he didn't think he was good enough for her. Currently, he needs a new loan to buy a garage business in Atlanta and the bank won't give him a loan unless he can prove he's single. He has one purpose, obtain the annulment and walk away from the town that brings too many memories. But, one look at Charlie and his priorities shift. He never stopped caring for her and just maybe she feels the same.

I love this series. It was great to read about the other brothers and his significant others. Payton was sweet in this one.

Charlotte was committed to the hospital and the Grow Clinic project. So, I was a little surprise that she let her dad push her around.

Jace realized pretty soon he wanted Charlotte in his life and he told her exactly what he was feeling which won many points with me.
I wonder if the Sherif and a certain mechanic are next.


Other books in the series: 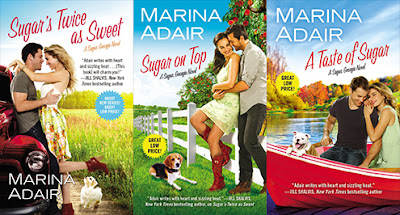 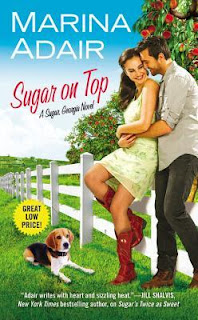 SUGAR ON TOP by Marina Adair (April 28, 2015; Forever Mass Market; Sugar, Georgia Book #2)
She's sassy and sweet
The last thing Glory Mann wants is to become chairman of the Miss Peach Pageant in Sugar, Georgia. Spending months hearing nothing but the clinking of pearls and judgment? No thank you! But when Glory is forced to take the rap for a scandal she didn't commit, the judge sentences her to head the committee. Even worse, her co-chairman is rugged, ripped . . . and barely knows she's alive.

He's ready and willing
Single dad Cal McGraw can't take any more drama in his life. After a difficult divorce, his little girl became a boy-crazy teenager and his hands are full. The last thing he needs is to spend his down time with the town bad girl. Glory is pure trouble-tempting and tantalizing trouble. But he can't deny the strong chemistry between them-or how her touch turns him inside out. Now as squabbles threaten to blow up the contest and the town of Sugar itself, Cal must risk everything on the sexy wild card to get a second chance at love . . . 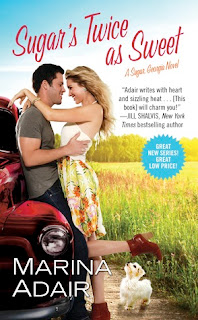 SUGAR’S TWICE AS SWEET by Marina Adair (November 25, 2014; Forever Mass Market; Sugar, Georgia Book #1)
He’s trouble she doesn’t need…
Thanks to a cheating fiance, Josephina Harrington’s perfect life just crashed and burned. Moving in with her overbearing parents is definitely not an option. No, she needs to prove she can make it on her own. And she will—by turning her great-aunt’s old plantation house into a destination getaway. She’s just not expecting her contractor to be so hands-on—and so totally irresistible.

…but everything she wants
Bad-boy golf champion Brett McGraw figured his hometown of Sugar, Georgia, was the perfect place to lay low and get his life back up to par. The leggy blonde with a pint-sized pup is the kind of sweet ’n’ sassy trouble he never saw coming. She doesn’t know a nut from a bolt and before long, he’s renovating her house…as she steals his heart. Can he convince Josephina that his womanizing ways are in the past and he’s ready for forever? 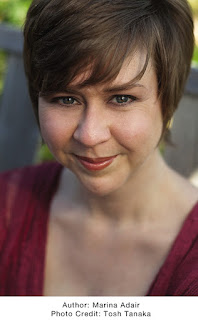 Marina Adair is a lifelong fan of romance novels. Along with the Sugar series, she is also the author of the St. Helena Vineyard series and the upcoming Shelter Cove series. She currently lives in a hundred-year-old log cabin, nestled in the majestic redwoods of the Santa Cruz Mountains, with her husband and daughter. As a writer, Marina is devoted to giving her readers contemporary romance where the towns are small, the personalities large, and the romance explosive. She also loves to interact with readers and you can catch her on Twitter at @MarinaEAdair or visit her at www.MarinaAdair.com.


Giveaway
a Rafflecopter giveaway
Posted by MrsLeif at 8:00 AM