Addicted to You
by Krista Ritchie and Becca Ritchie
Addicted #1 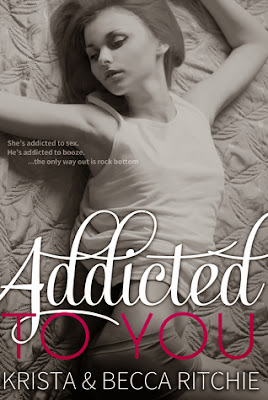 Lily Calloway is hiding a huge secret from her rich parents. She is addicted to sex. She sleeps around. It's a compulsion. Her best friend and roommate, Loren helps her hide it.

Loren Hale and Lily have known each other since childhood. Their families have been friends and they will be very pleased if Lily and Lo got married. There is just a tiny detail, Loren has his own addiction. He is an alcoholic and he doesn't want to control his drinking. He lives with Lily and they both fake being in a relationship for 3 years to avoid family drama. Both sets of parents are completely fooled by them.

Loren cares for Lily but at times he cares more about drinking. Lily is his designated driver and Lo keeps Lily safe or so they thought.

When Loren decides he wants more out of Lily and wants to take a chance at a real relationship their vices will become and obstacle than neither can prepare for.

I love Lo. He was so good to Lily. He struggles with his alcoholism but he does care for Lily a great deal.

On the other hand, I had a hard time relating to Lily. Her addiction bothers me. She wasn't safe and it worried me. She didn't even know what she was doing at times.

I can wait for their road to redemption.

"Loren Hale is an alcoholic beverage and he doesn't even know it."