Unbreak My Heart
by Nicole Jacquelyn 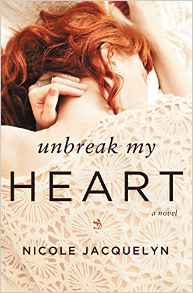 What do you do when your soul mate marries your best friend?


If you're Kate Evans, you keep your friend Rachel, bond with her kids, and bury your feelings for her husband. The fact that Shane's in the military and away for long periods helps-but when tragedy strikes, everything changes.
After Rachel, pregnant with her fourth child, dies in a car accident and the baby miraculously survives, Kate upends her entire life to share parenting duties. Then on the first anniversary of Rachel's death, Kate and Shane take comfort in each other in a night that they both soon regret.
Shane's been angry for a year, and now he feels guilty too - for sleeping with his wife's best friend and liking it . . . liking her. Kate's ability to read him like a book may have once sent Shane running, but their lives are forever entwined and they are growing closer.
Now with Shane deployed for seven months, Kate is on her own and struggling with being a single parent. Shane is loving and supportive from thousands of miles away, but his homecoming brings a betrayal Kate never saw coming. So Kate's only choice is to fight for the future she deserves - with or without Shane. . .

Katie and Shane grew up together. On a break from college, Katie brought her friend Rachel home. Shane had to have her, even though he knew that Katie has always had a crush on him.

Years later, Shane and Rachel are married with three kids and one more on the way. Katie lives close to her best friend and helps with the kids when Shane is deployed. One tragic day there’s a car accident that takes Rachel’s life. Now Katie is stepping up even more to be a parent to the kids. Shane and Katie navigate this difficult period, but when another life changing event occurs they are both in over their heads.

Honestly, I’m not sure what to think of this story. I read it in one sitting. I laughed a lot. I cried a lot… but I also cringed a lot due to some of the situations that arose.

Shane was a total a**hole. Understandable I suppose. His wife, the mother of his children died. I completely understand his thought process… at first. But his continuous behavior was so back and forth it was making me dizzy, which in some weird way was one of the things I did appreciate from the story. It was real! Yes, Shane was a jerk, but his reactions were real.

Generally when I read a fiction romance story where there is death or tough subject matter, the character shorty grieves and then moves on with the new here or heroine with little to no looking back. But with this story it was all over the place, just like it would be for anyone in this horrible situation.

UNBREAK MY HEART was an addicting book. Some things made me cringe but I was still feeling and living their experience. It was 100 percent one of the more “real” stories I’ve read in a long time. No sugarcoating.

Posted by MrsAlcide at 1:42 PM