One Lucky Hero by Codi Gary 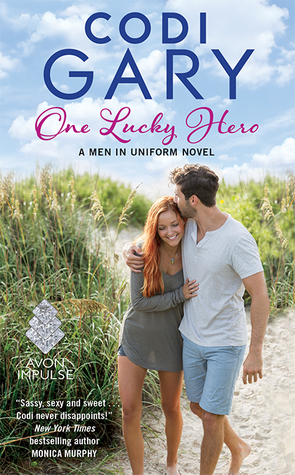 Codi Gary launches her new Men in Uniform series with a hero...and a heartbreaker.

Violet Douglas just wants one night where she can be normal. Where she can do something for herself and not be just her siblings guardian. But when she ends up spending her one night of freedom with a complete jerk, what does she do? She goes home with him.

Dean Sparks is used to keeping women at a distance but for some reason, he can’t resist Violet’s snapping wit or smile. So when he suggests a friends with benefits arrangement, it seems like the perfect solution to their undeniable attraction. No details about their lives, their childhoods. Just mind-blowing sex.

When their worlds collide outside the bedroom, Violet finds herself leaning on Dean in a way she never has, but what’s the point in falling for a guy who isn’t sticking around?

One Lucky Hero is the first book in the new series Men In Uniform. We meet some of the characters in her novella I Need a Hero (which I loved).

The main couple is Violet Douglas and Dean Sparks.

Dean is in charge of the Alpha Dog Training program. The program helps juvenile delinquents  serve their sentence by learning how to take care of and train dogs that are getting a second chance in life. Dean is happy with the way the program is doing but he's also desperate to go back into action. He just needs his psych to clear him back for duty. He's not looking for romance since he doesn't think it's fair to start something just to leave soon after.

Violet's life is nothing more than a huge responsibility. When her mother committed suicide and her dad left, she became her siblings guardian. She did it out of love. She cares for them immensely but this situation has put a damper on her social life. Starting a serious relationship is not in the schedule.
When her girlfriend asked her out to attend a concert, she is ready to party for the first time in a long time. Unfortunately, Dean is not making it easy but as the night progresses things between them change. Their one-night stand turns into more when a week later, her brother is forced to attend the Alpha Dog Training, making it impossible for them to avoid each other any longer.

Codi Gary's book's are a must for me. I just know that I enjoy her stories. In One Lucky Hero, both main characters are likable. They both have reasons not to start a serious relationship and they try really hard to avoid it.

There were many sweet moments coming from Dean. I love his relationship with his lazy dog, how he helps Violet at home despite her assurances that she can do it all. He was there for all the Douglas siblings, making it impossible for me to dislike him.

Violet was an admirable character. She has done everything to keep her family together. She was super supportive of her siblings and she knew when she was in over her head too. It just took her a little bit to recognize it. It's hard to put your trust in someone new.

I wonder who's next in this series...

Dean’s eyes narrowed and glittered. “You don’t know me well enough to screw with me. I might be dangerous.”
For a half a second, his words kick-started Violet’s heart rate. He was right about that, and he definitely had the guns to twist her head off with one jerk.
“Are you?” she asked.
He leaned over her slowly, and she stiffened, her body screaming to step back.
“No, I’m not.”
His soft words sank in, and she let out a huge breathless laugh. “That’s not something you should joke about.”
“Hey, you were messing with me first.”
And now the heat radiating off his body was screwing with her senses, drawing her closer to him. The light scent of cologne drifted up, and she had the craziest urge to press her nose against his chest and get a better sniff. Violet caught herself in the nick of time, knowing that there was no coming back from that.
“I wasn’t threatening and trying to intimidate you with my very presence. I don’t know who told you that you were a funny guy, but you aren’t. At all.”
“You’re right, it was a bad joke,” he said. “I’m not really used to being around civilized company. Most days, I just hang with this guy”—Dean pointed at Tyler—“and a bunch of other dudes who think I’m hysterical.”
“Are you the boss?” she asked.
“Yeah, why?”
“Then they really don’t think you’re funny, they are just lying because they don’t want to get fired.”
She said it all with a straight face and was secretly delighted when he chuckled. He was close enough still that the rise of his chest was only a few inches from her, and her gaze was drawn to the definition of his muscles through his T-shirt.
Geez, was she really so desperate that she was willing to hook up with a jerk with a weird sense of humor? She waited for her subconscious to give her a definite hell no, but apparently, the jury in her head was still deliberating.
“We don’t really get fired from the military, unless we are suddenly unable to do the job.”
“Well, regardless, if that’s a sample of your humor, you need to watch some comedy. And not dark comedy like The Cable Guy or The Ladykillers.” Violet glanced over at Tracy and Tyler, who were still nursing their beers. She was running out of witty things to say to Dean and wouldn’t mind another drink in her system, but waiting on Tyler to buy another round was slow going.
Besides, it wasn’t like she couldn’t buy her own alcohol. Especially if it was something other than hops.
“I’m going to grab another drink. You want one?”
“I’ll come with you and get one myself.” He drained the remainder of his plastic cup, and she sighed in exasperation.
“It’s a beer, not a proposal. You can grab the next round.” Violet tapped Tracy and Tyler on the shoulders. “Another?”
“Sure, thanks,” Tyler said.
Tracy nodded and mouthed, Isn’t he hot?
Violet answered with a large smile, although he wasn’t in her opinion. No, she preferred her men with dark eyes and no manners, apparently.
Except maybe the rudeness was an act. For a second there, she’d thought Dean might have a sense of humor. Granted, a dark and twisty sense of humor, but she liked that.
Liked him.
Maybe he wasn’t a total loss. He might be suffering the effects of a bad breakup, and saw all women as the enemy.
Or you’ve been watching too many Hallmark Channel movies.
She could take the pressure off, give him notice that she wasn’t looking for a boyfriend. Boyfriends were just one more thing to add to her ever-growing list of responsibilities; they were time consuming, needy, and the last thing she wanted was to put one more person’s needs before her own.
As she grabbed their empty cups, saving Dean’s for last, she looked up at him from beneath her lashes and went for broke.
“By the way . . . I wasn’t looking for a date.”

An obsessive bookworm, Codi Gary likes to write sexy contemporary romances with humor, grand gestures, and blush-worthy moments. When she’s not writing, she can be found reading her favorite authors, squealing over her must-watch shows, and playing with her children. She lives in Idaho with her family.