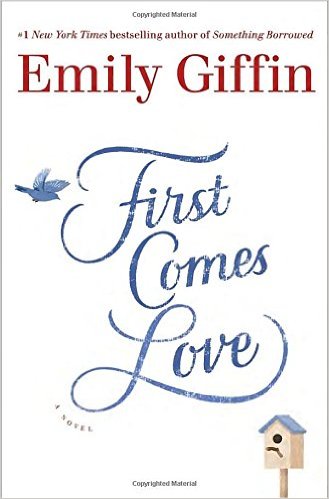 In this dazzling new novel, Emily Giffin, the #1 New York Times bestselling author of Something Borrowed, Where We Belong, and The One & Only introduces a pair of sisters who find themselves at a crossroads.

Growing up, Josie and Meredith Garland shared a loving, if sometimes contentious relationship. Josie was impulsive, spirited, and outgoing; Meredith hardworking, thoughtful, and reserved. When tragedy strikes their family, their different responses to the event splinter their delicate bond.

Fifteen years later, Josie and Meredith are in their late thirties, following very different paths. Josie, a first-grade teacher, is single—and this close to swearing off dating for good. What she wants more than the right guy, however, is to become a mother—a feeling that is heightened when her ex-boyfriend’s daughter ends up in her class. Determined to have the future she’s always wanted, Josie decides to take matters into her own hands.

On the outside, Meredith is the model daughter with the perfect life. A successful attorney, she’s married to a wonderful man, and together they’re raising a beautiful four-year-old daughter. Yet lately, Meredith feels dissatisfied and restless, secretly wondering if she chose the life that was expected of her rather than the one she truly desired.

As the anniversary of their tragedy looms and painful secrets from the past begin to surface, Josie and Meredith must not only confront the issues that divide them but also come to terms with their own choices. In their journey toward understanding and forgiveness, both sisters discover they need each other more than they knew, and that in the recipe for true happiness, love always comes first.

Emotionally honest and utterly enthralling, First Comes Love is a story about family, friendship, and the courage to follow your own heart—wherever that may lead.

The story centers around one family who's destroyed after Daniel, their son and brother die. The father who's an alcoholic starts drinking again, leading to a divorce. Both sisters, who never had a close relationship suddenly are even more distant from each other.

Fast forward fifteen years and Josie who has always behaved like a free soul is worried about almost turning forty. She's tired of dating without finding the right man. Once, she fell in love but the relationship fell apart. Josie is a first-year teacher and her ex-boyfriend's daughter is soon to be part of her class. She dreads meeting him and his wife again but this interaction forces her to re-evaluate her life and she decides that she wants a child before it's too late. Just before this, her last date is with Pete, a physical therapist who seems to be really interested in her. Josie has always been able to count on her best friend Gabe who will help her narrow down a sperm donor.

Meredith is Daniel's other sister. She is married to Daniel's best friend. They started a relationship the morning after Daniel died. He was there for her and her parents, supporting them and helping spread the awful news.  Meredith is hiding how unhappy she is with her life. She wanted to be an actress and instead, she's a lawyer. The only thing good in her marriage is her daughter Harriett. She knows the death of Daniel is the only reason why her life turned out this way. She's getting tired of living this charade.

I felt saddened by these characters. Sometimes the death of a family member can make a family become closer but in this case, it was the opposite. The parents get divorced and the daughters' relationship becomes even more strained. At times, it felt like they hated each other. One was trying to put blame on the other one for past mistakes. If I had to choose, I would say I like Josie better. Yes, she was self-centered but at least she was trying to find her happiness. She was finally ready to move forward with her life while I felt like Meredith's was imploding hers.

I want to mention that I found her relationship with Gabe a bit odd. Not because of what he offers to do but because he was always described as morose. Why hang out with someone who can be that way? Although he was definitely someone Josie could count on.

Pete surprised me. I don't know that I would have behaved so rational with the whole ordeal...probably not.

I was in love with Nolan. He was a great dad and a great husband. He made me wish the book had an epilogue. I was hoping to get more of an insight into his future.