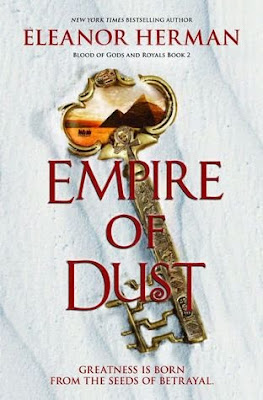 In Macedon, war rises like smoke, forbidden romance blooms and ancient magic tempered with rage threatens to turn an empire to dust After winning his first battle, Prince Alexander fights to become the ruler his kingdom demands—but the line between leader and tyrant blurs with each new threat. Meanwhile, Hephaestion, cast aside by Alexander for killing the wrong man, must conceal the devastating secret of a divine prophecy from Katerina even as the two of them are thrust together on a dangerous mission to Egypt. The warrior, Jacob, determined to forget his first love, vows to eradicate the ancient Blood Magics and believes that royal prisoner Cynane holds the key to Macedon's undoing. And in chains, the Persian princess Zofia still longs to find the Spirit Eaters, but first must grapple with the secrets of her handsome—and deadly—captor. New York Times bestselling author Eleanor Herman entwines the real scandals of history with epic fantasy to reimagine the world's most brilliant ruler, Alexander the Great, in the second book of the Blood of Gods and Royals series.

I really enjoyed the first book in this series, Legacy of Kings , so I was extremely excited to get my hands on this book! This book definitely did not disappoint. I love Eleanor's writing style and the way that she seamlessly weaved historical facts into her story. I never felt like I was being bogged down with historical information, but I still felt like I was learning a lot. Eleanor clearly did a lot of research for this series, and it paid off! There were also so many twists and turns that I was not expecting throughout this book. Eleanor was able to keep me on the edge of my seat through most of the chapters. I really enjoy multiple POVs in a book, but it was hard to for me to enjoy every POV in this book. I like some characters a lot more than other characters, so I did find myself wanting to skim the chapters of certain characters. I thought some of the storylines with certain characters felt unnecessary compared to storylines of other characters. I mainly wanted to read about Heph, Kat, and Zofia. They are my favorite characters, and I thought they had the most interesting chapters in this book.I am a huge romantic, so I was eating up the romance in this book. I don't want to spoil anything, but certain ships sailed and new ships were formed in this book. I loved it! Eleanor is an expert at creating a slow burning romance with great tension. There were two couples that I adored in this book, and I am so excited to see their relationships develop more in the next book!

The ending of this book just made me want more! I am really looking forward to seeing what Eleanor has in store for us in the next book. I cannot wait to be reunited with Heph, Kat, and Zofia!If you were a fan of Legacy of Kings , then I definitely recommend picking up Empire of Dust .4 / 5 Fangs*This ebook was given to me in exchange for a honest review. *